This weekend at Knockhill saw no-less than 145 competitors roll in for a weekend of racing action across Saturday (27th) and Sunday (28th) April. The event marked the first bike race meeting of the 2013 Knockhill Motor Sports Club season and provided the assembled crowds with some thrilling entertainment. 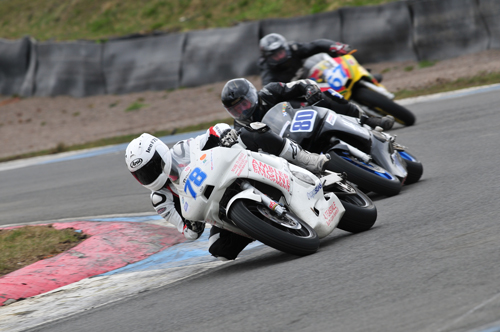 Despite the undoubted talent of the aforementioned riders, it was a couple of unfamiliar names that provided the stand-out performances of the weekend. Lee Teasdale, competing in the Cupar Motorcycles Pre-Injection 600 class, blasted his way to an impressive five race wins from five race starts. Even more impressive when you consider that the Haltwhistle racer was also competing in the Scottish Lightweight class, racking up a gruelling ten race schedule over the course of the weekend! 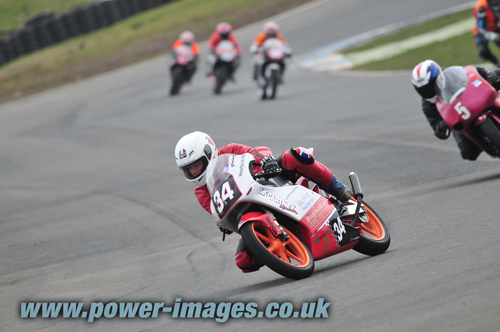 Teasdale’s winning feat was matched by young Irish racer, Paul McCartney, as he rode his way to an equally impressive five wins in the Skinner Motorcycles F125 class. No doubt it will be a quick journey home for the young Irishman and hopefully his team will gather the necessary funds for a crack at the British Superbike event in June. Elsewhere in the Skinner Motorcycles F125 class, 11 year old, Rory Skinner marked an impressive racing debut with three podium finishes and a fistful of trophies to take home to Perth. The young school boy even managed a quick go of the new swing park at Knockhill, much to the delight and amazement of the Knockhill commentary team.

In the Superbike class, it was that man Burns who would prove the class of the field, aboard is JG Speedfit Kawasaki Racing machine, securing four wins in an impressive display. The other race win was taken by former track day rider, Jim Laing, in only his second successive season racing and his first, in the Scottish Superbike class; a remarkable achievement from the highly regarded Aryshire man.

“It’s unbelievable, last time out l was really struggling and Torquil (Paterson) lapped me in the races at East Fortune. I don’t have a pit board or anything so l was just nailing it whenever l could. The conditions were tricky but l’m just delighted to have won,” commented Laing.

The Scottish Superstock 600 Championship races were dominated by the close duelling action of Michael Robertson and Greg Gilfillan. Both sharing the spoils with one race win each, however, Robertson had the upper-hand in the equivalent KMSC races; taking two race wins to Gilfillan’s solitary victory. Gavin Donald was the dominant force in the Lightweight class, taking four race wins before eventually being overhauled by the Redline KTM of Tarran Mackenzie in the final race of the day.

“It’s always nice to come back to Knockhill, Taz (Tarran Mackenzie) loves coming here too. It’s also really great to see so many people here supporting the riders and l’m sure all the racers have thoroughly enjoyed their weekend.”

You can find out how all the riders faired by checking all the results via the MyLaps website.

Lastly, we’d like to thank everyone involved with the event this weekend, sponsors, marshals, officials, competitors and fans alike. We’d also like to give a special mention to the MT125 series for bringing such a great spectacle to the Knockhill event package. We wish them well for the remainder of their season and indeed, hope to welcome them back very soon.

Have a safe journey home and thanks again from all the Knockhill Team.