This weekend sees the return of Scottish Championship club racing to Knockhill Circuit and  Team Sleigh Racing will have a full compliment of cars out challenging for titles in the Celtic Speed Scottish Mini Cooper Cup. 2013 is looking like being an exciting year with the MINIs once again being asked to support the BTCC event at Knockhill. 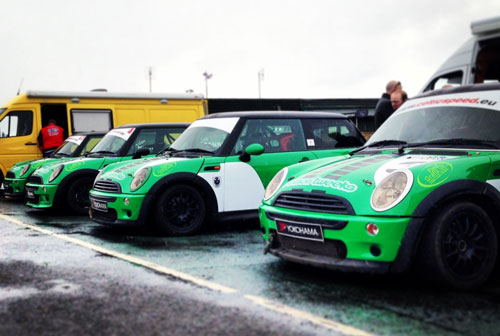 Former champions Vic Covey Jnr and Kenny Thirlwall, returning from Clio Cup and Formula Ford respectively, are back in the series this year and will be looking to reassert their usual positions at the front of the pack.

Team Sleigh Racing have retained their title sponsors, Athena Asset Management and JRM Coachworks for this year, but little remains of last year’s driver line up with a mixture of new and old making up an exciting team.

Team Sleigh’s own returning champion will once again be David Sleigh. After winning last year’s championship, retaining his title, David is out for 3 in a row. As the only driver in the championship’s history to win all 3 races in one meeting, the first in nearly 10 years of the Mini Cooper Cup, it would be tough to bet against him.

Last year’s newcomer’s champion and 3rd place finisher in the overall championship, Malcolm McNab is back with the team looking to build on the strong second half of the season he had in 2012. Malcolm said, “This year my focus has to be the main championship title and getting good results in right from the off, there’s no newcomers results to fall back on this year.”

Joining David and Malcolm is Michael ‘Micky’ Doyle.  A veteran of various TOCA package races, he should feel right at home in the MINIs, drawing on his previous experience racing in the Clio Cup and BTCC. Micky is a very experienced competitor in tin top racing with a good knowledge of car setup and he’s looking forward to getting the most out of the cars this season.

Joe Tanner of Rennat Helmet Design and Motors TV presenting fame, is racing with Team Sleigh this year, in addition to maintaining his role of pitlane interviewer for the championship’s TV coverage. Although this is Joe’s first season in a front wheel drive racing formula, he has a history of single seater racing and a brace of championships under his belt in both Formula Ford and Formula Renault. He’ll be one to watch, possibly quite literally if rumours of live TV commentary from inside the race car are to be believed!

The youngest member of the team this year will be 16 year old Aidan Moffat. Aidan has already had a very successful career in kart racing. He started in Junior bangers at only 14 and went on to win the Scottish track championship. In addition to this he has experience racing in the Junior Fiesta ST and in the National Fiesta championship. This year he will also be competing in the Scottish Fiesta ST championship as well as the Mini Cooper Cup.

With Micky, Joe and Aidan all eligible for the newcomers cup, that’s going to be a close fought battle this year and judging by all the drivers’ pace last weekend in testing, the Sleigh ride is looking as fast as ever!

You can catch all the Team Sleigh racers in action from 12.50pm in their opening race of the 2013 campaign. Racing at the event will commence around 11am with 15 races scheduled it promises to be a busy old day on track, make sure you join us this weekend for the Jim Clark memorial race meeting.

Tickets for the event are available via the Knockhill website (advanced booking discounts apply). Alternatively tickets can be purchased at the gate on Sunday 7th April. On the day ticket pricing is as follows: