Local driving combo of John Rintoul and Jim Rintoul from Crail came out on top to win the inaugural Grant Construction Knockhill Rally at Knockhill today in their Mitsubishi Evo 9. With blazing blue skies and temperatures below zero, the Knockhill scene was more akin to an Alpine event rather than Scotland with a great crowd in attendance. 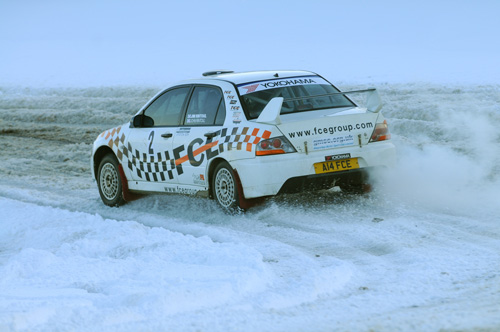 The Rintoul’s won, beating Ian Campbell and Lyndsey Paton, also in an Evo, and in third place was Des Cambell and Alex Orr in a Peugeot 206. Such was the competitiveness of the event, the top two were trading times between each other throughout the event, indeed on one stage they were identical in their stage times.

Leading the way for much of the day was Snowman Rally winner Reay Mackay in his MG Metro 6R4 but unfortunately the car succumbed to electrical problems on special stage 4. Also featuring at the top of the leader board were Dale Robertson and Paul McGuire, in their Mitsubishi, who had to with draw after stage 5.

Knockhill Events Director said “I can’t praise everyone enough for staging such a wonderful event today. All the Border Ecosse Car Club team, volunteers and Knockhill staff worked tirelessly to make the event happen, and without that effort over the whole weekend, the event simply would not have happened. Feedback has been awesome too, and I am delighted that the competitors loved the challenges of Knockhill in the snow. A big thank you too to Grant Construction for their help in getting the event running and sponsoring it too. Personally, I can’t wait until we host another rally at Knockhill”.