The inaugural Knockhill Motor Sports Club bike race meeting took place at Knockhill this weekend. Last month we reported the tragic loss of Knockhill’s Chief Marshal, Wullie Brown and what a huge bike racing fan he was. As a special tribute Knockhill have decided to award a special trophy to the person (competitor / marshal) who shows endeavour, overcomes hurdles or shows great support for fellow racers/marshals.

Ian Forrest, Clerk of the Course awarded the trophy to a young Formula 125 competitor. Ashley Robson from Johnshaven. Ashley showed true grit all day long after a fall during practice, but despite her relative inexperience, she showed great determination not to let that effect her performance. It was that performance, which she increased leaps and bounds throughout the day that sealed her award.

Ian said: “She just kept plugging along, she just wouldn’t let anything get her down, her attitude towards bike racing was spot on and the improvement in her riding throughout the day was impressive.”

Alongside the Wullie Brown Trophy, the Knox rider of the day award was also presented. Paul McClung from Haddington onboard his Formula 125 won the award as voted by spectators at the event. 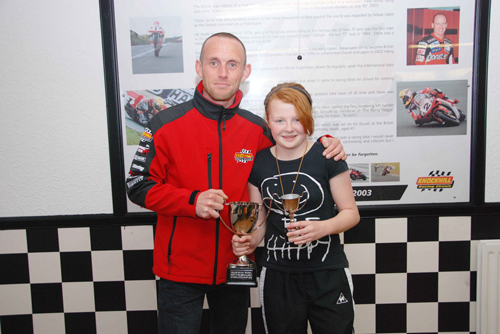