Most of the talk however, centred on the Sir Jackie Stewart Trophy race, where Scottish and Irish Formula Ford competitors battle each other for one of the most coveted trophies of the year.

Returning 2010 champion, Scott Fraser was a surprise inclusion to proceedings having taken the opportunity to replace Ross McEwen behind the wheel of his Van Diemen RF92 single seater racer.

Indeed, Fraser put in a strong performance, battling for 2nd position with Irish competitor Ivor McCullough before a coming together effectively ended both men’s hopes.

Pole setter and race leader, Ken Thirwall only had to manage his car round to take a comfortable victory. But with four laps remaining the unfortunate Jonathan McMullan was involved in a high speed crash which resulted in the safety car being deployed. Thirwall though managed to hold of the advances of both Alistair Dow and Adrian Pollock to seal victory. 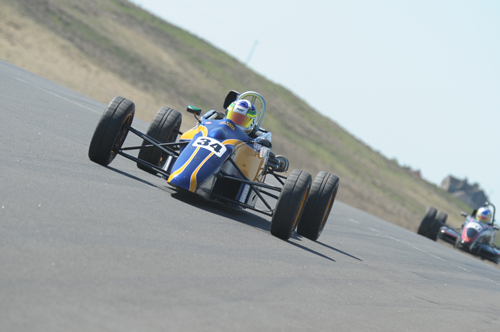 “I’ve started the season really well and today’s result is just a fantastic bonus, the safety car didn’t help me much but l managed to hold onto the win. I’m looking forward to a few beers tonight,” said Thirwall.

“It’s been a fantastic weekend overall with some real fast, clean racing action. Credit to all the Irish boys, it’s a long journey over here, but they do add to the whole event.”

So why not bring along your Mazda and join the celebration.

Please click here to see a full gallery of images from this event.