It was Fords galore at Knockhill today with the amalgamation of three regional Ford RS Owners’ Clubs. Central, East and North east Ford Clubs descended on Knockhill for a Ford festival and brought along some of the most iconic Ford models in the company’s long history.

Escorts, Focuses, Fiestas, Cosworths, Mondeos and some mighty rare Cortina models were all on show today. Some of the cars had ventured over 500 miles to be displayed, amazing, especially when you consider the ages of the older RS models on show. 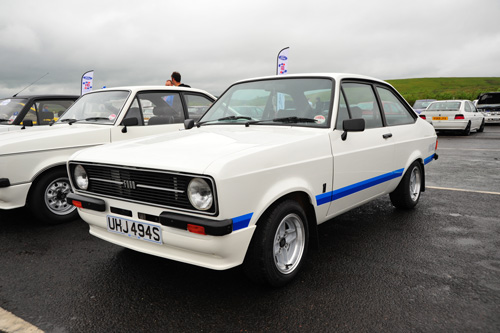 Some star attractions also turned up, Charlie Shaw brought along his rapid 800bhp monster and one lucky raffle prize winner got a trip around the track inside the speedy Focus. Another car which has featured on Top Gear, was a 1800RS which was said to be worth £60,000. There were also competitions for all the car club members who had travelled far and wide to be part of Ford Live.

“When l saw some of the cars for the first time, l was gob-smacked by the condition they were in. It’s remarkable that the cars are still going, never mind looking in mint condition.

“The guys have obviously spent a lot of time and effort on there cars. Even some of the newer Ford Focus models looked like they’d just been brought from a showroom.”

Stuart continued, “This year we have taken our Hot Hatch events in a slightly different direction. We’ve involved the car clubs a lot more and had dedicated days for different marques, which has worked well. We’ve had a Vauxhall day, Ford Live today and next month we’ve got a Jap day in association with Total Car Magazines.”

The next Hot Hatch action at Knockhill takes place on Sunday 17th July with Total Jap Car Scotland. We’ll have Japanese models on show from participating clubs, Jap only track sessions running in alongside our regular track sessions. The event will be brought to you in conjuction with Total Car Magazines, publishers of Total Evolution, Total Impreza, Total Nissan and Total Honda magazines.