Today at Knockhill (Sunday 25th September) sees the final round of the Knockhill Motor Sports Club racing series. Over 80 competitors will take to the track throughout the day to compete in numerous racing classes. 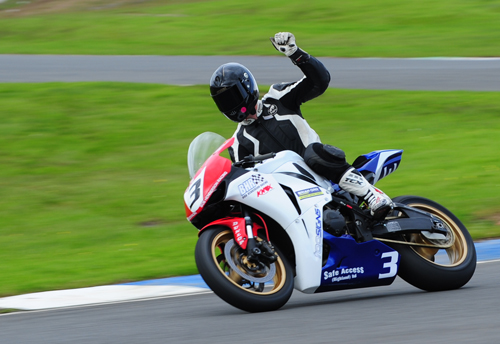 In the main Superbike class, Inverness rider Adrian Clark aboard his Honda CBR 1000 RR closed the gap between himself and Championship leader, Bruce Birnie in the opening Superbike race. Clark took a five second victory from Montrose based Birnie with Donald MacFadyen finishing in 3rd.

“The bike feels mint compared to the last time l was here.

“I got a cracking start and just got my head down, l knew Bruce was there as he’d had a go a couple of times, but on the final lap l think he got stuck behind a back marker and it was an easy win from then on,” said Clark.

Birnie still leads the Superbike Championship but will be looking to score some heavy points in the next race.

“I wanted to make it a spectacular finish and make a move at the hairpin, although if l’d forced my way through at the chicane the other rider might have fallen and l’d have been hanging on for sure. But l’ll take the second and stay top, l did want to win that one though,” said Birnie.

There was also race wins for Butcher, McLean, MacFarlane, McClung, Lamb and McGaw in this morning’s programme. This afternoon’s racing has just recommenced with another nine races scheduled. So if you are looking for something to do this afternoon then get along to Knockhill for some superb bike racing action.

Tickets are available at the gate.