This weekend (Sunday 25th September) sees the inaugural season of the Knockhill Motor Sports Club bike racing series come to a thrilling conclusion. Championship titles will be decided on a day of expected high drama and intrigue. 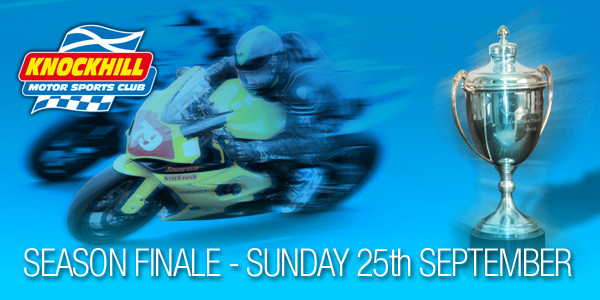 Competitors have fought hard all season for some coveted prizes including a Motorpoint Yamaha test with Rob McElnea’s superbike squad for the top Superbike rider. Honorary President, Niall Mackenzie has also offered a ‘test day’ with him and his racing boys Taylor and Tarran for THREE top 125 competitors.

Sidecar legend, Steve Webster had donated The Daily Express International Sidecar Race Trophy that he won in 1986 to the Club for sidecar competitors. This prize has already been claimed by sidecar duo, Scott Laurie and James Neave.

There will be lots more silverware up for grabs for all classes. Racing action gets underway approximately at 11.30am. A 14 race programme is scheduled to run with races for the BMW Motorrad Central Superbikes and Superstock 600, Clubman, Pre-injection 600, F400, Minitwin, GP 125, F125, and Classics.

Tickets can be purchased in advance via the Knockhill website and are subject to booking discounts. Alternatively tickets will also be available on the day during the event.