Alan Kirkaldy has his hands full to make Wednesday’s Stock Car Summer Series as his engine is a hundred bits after his most successful night ever on Saturday night.

The St Andrews racer added the British Formula Two title to his Scottish title in front of a huge crowd and is aiming to continue his winning ways on Wednesday. The problem however is that his engine has been stripped to check its legality and now with all being found correct, he has to rebuild it for Wednesday evening’s event at Knockhill. 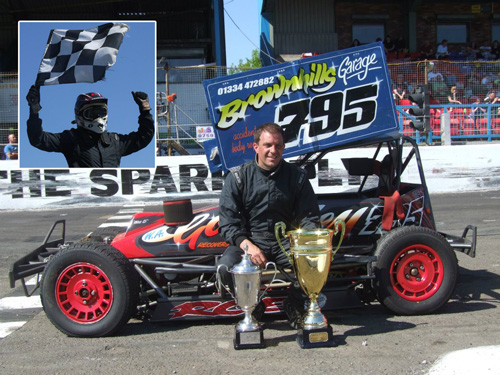 An amazing 46 cars were entered in the F2 event with 28 making the final and with several red flags and yellow flags incidents, eight drivers survived with Alan coming out on top. The former SMRC Formula Ford racer required all his skills and bravery to clinch the title in such a titanic battle.

All going well, Alan is aiming to be at Knockhill on Wednesday for round two for the Stock Car Summer Series with action starting at 6pm. Adult admission is £10 with advanced discounted tickets available.