Tarran Mackenzie had a small taste of what it is like to be part of the Olympics as he took time out at Snetterton and managed to get his hands on an Olympic Torch!  The Torches are  normally held aloft by athletes and specially nominated individuals as it makes its way around the UK ahead of the Opening Ceramony in July and one from the start of the route found its way to the BSB round for everyone to admire. The Tourch  is due to be in Fife on June 13th as it comes within 4 miles of Knockhill as it passes through the nearby villages of Cairnyhill, Crossford and Dunfermline on its way to Edinburgh that night. 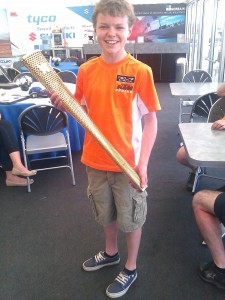