In the Scottish Superbike Championship, Bruce ‘The Barber’ Birnie suffered a below-par weekend as his closest rivals in the Championship stole the show. 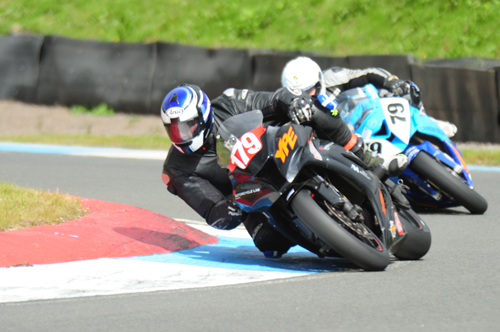 Clackmannan youngster Andrew Tasker took pole position on Saturday in difficult conditions with a 52.001 second lap.  The Kawasaki ZX10R rider then went on to dominate the opening race, taking a lights-to-flag win. Birnie managed to work his way back up the field from his sixth place grid slot to finish second ahead of a racy looking Donald MacFadyen.

On Sunday, the second Scottish Superbike race was all about Torquil Paterson. On a stock bike the Scone racer took a superb win against a hard charging Andrew Tasker. Paterson though almost conspired to throw it all away on the last lap. Instead of concentrating on winning the race, he decided to look around for Tasker and the Clackmannan man almost sneaked past Paterson’s blind side. Paterson however managed to hold on by the slimmest of margins crossing the line just 0.028 seconds ahead.

MacFadyen secured his second podium of the weekend with Birnie off the pace in fourth. It was later discovered that Birnie was struggling with injury and would hang up his leathers up for the rest of the weekend.

In the other Scottish Championship classes Bryan Duncanson added another race win and a fifth place finish to cement his lead at the top of the Superstock 600 standings. Meanwhile, young Crossgates rider Greg Gilfillan took a classy win in the other Championship race. Four other riders secured podium finishes to reiterate the competitiveness of the Superstock 600 series. Liam Shellcock (2nd), Callum Paterson (2nd), Chris Cook (3rd) and Cathal Laverty securing his first podium of the year (3rd).

Paul McClung was again in dominant mood in the Scottish Supertwin series, taking his 10th and 11th race wins of the season.

The Scottish Championship series now heads off to East Fortune on 18/19 August, before returning to Knockhill in September.

A whole selection of images can be found on out photobox site.