Dario Franchitti, arguably one of world’s best racing drivers will be at Knockhill on Sunday 7th October to support the Scottish Motor Racing Club’s final event of the 2012 season. Dario’s racing highlights include 4 IndyCar Championship titles and 3 Indianapolis 500 wins as well as numerous titles in Europe before embarking on his remarkable career in America. Indeed such is Franchitti’s American success, he is currently tied for 7th position on the all-time IndyCar winners list. 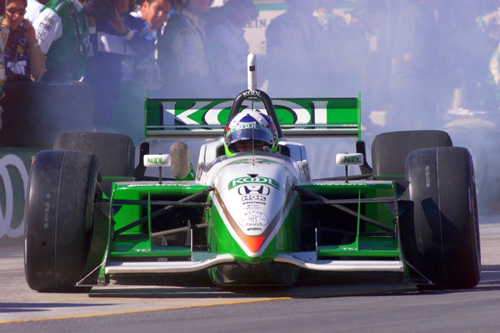 Despite a stellar career, the Bathgate born Scot has always maintained a close relationship with the Scottish racing scene and of course, Knockhill; the place where it all started him. As a teenager, Dario was an instructor at the Knockhill Race School and was also sponsored by Knockhill when he progressed up the racing ladder in British Formula 3 with Sir Jackie Stewart’s race team.

Dario will also be showcasing his 1999 Reynard Honda which he raced and won at Surfer’s Paradise, Australia. The car will be on display in paddock one within the Graham Brunton Racing garage.

“We’re obviously delighted to be welcoming Dario back to Knockhill again this weekend. We are equally pleased that he will be bringing along one of the cars that has helped him achieve such success in the tough and competitive US race scene. It’s likely that this will be the only time the vast majority of the Scottish racing public will see an IndyCar in the flesh.

“Dario’s career has been nothing short of sensational. He is up there amongst the top racing drivers ever to come from Scotland. I remember fondly working alongside Dario when he was starting out in his career and we are delighted that Dario, along with fellow Scots David Coulthard and Allan McNish all drove a race car for the first time, at Knockhill.

“What those guys have gone on to achieve is nothing short of remarkable,” said Knockhill Events Director Stuart Gray.

Franchitti will be in attendance to witness the conclusion to the Scottish Formula Ford, Mini Cooper, Legends, Sports & Saloon, Fiesta and Classic Sports & Saloon Championships. A number of the classes remain finely balanced which should make for some exhilarating racing. Action starts around 9am with practice and qualifying, before the first race of the day commences around 11am.

Tickets for the event can be purchased in advance via the Knockhill website or on the gate during the event.

October 3, 2012
Events Blog No comments Events
← Attention all cyclists, the wait is almost over! Thrilling climax to the SMRC season awaits this weekend →