Despite some damp and cold weather conditions at Knockhill today, the Knockhill Reverse Circuit offered plenty of insight into what promises to be a very exciting race track in the coming years. Most competitors took to the Reverse Circuit for the first time this morning, the early sessions were all about learning the new track, all of which was evident from the vast array of racing lines adopted by many of the competitors.

But once the racing started, it was all about competing toe-to-toe on a very slippery circuit. Whoever mastered the conditions, would seal themselves some Knockhill Motor Sports silverware to end the season with a flourish. Indeed, some of the big names in some of the classes struggled with the new layout, whilst others, who regularly feature further down the field, blossomed with the level playing field on offer. 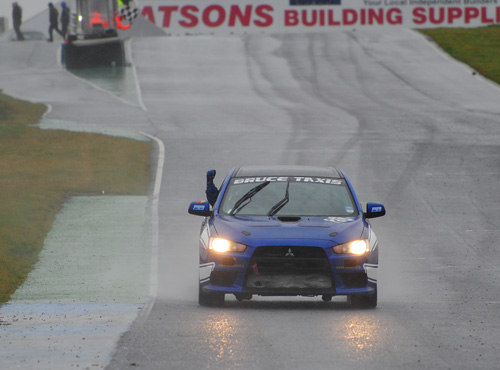 One such flower to blossom was Alex Bruce, whether he’d appreciate being called a flower is another matter, but given that he secured his first ever race win at Knockhill today, we’re pretty sure the jubilation he’s feeling right now will offset any anger felt at being referred to as a flower. Garry Watson had been dominant in the Sports and Saloons series all year long, however he just couldn’t get to grips with the circuit and Bruce and Gary Wait took full advantage to secure some well earned wins. 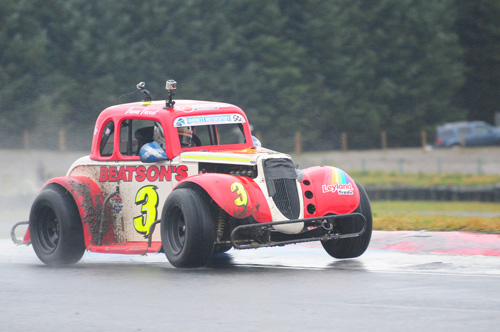 In the Legend series, perhaps it was insider knowledge that led Knockhill instructor Duncan Vincent to a hat-trick of race wins today. Vincent becomes only the 2nd competitor in the 2012 season to take a maximum 600 point haul at any Legends event this year. Vincent had already proved this season that he could compete against the best Legends racers by taking victory at an SMRC event earlier in the year. We reckon he’ll be desparate to pull the funds together over the winter to commit to a full Legends season in 2013. 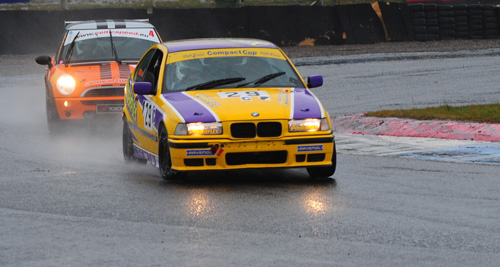 Today also saw the potential birth of a new Scottish racing series. Shonny Paterson and Steve Roberts took to the track in two BMW 318Ti Compacts, mixing it up in the Open Saloons series alongside Mini Coopers and Fiesta STs. The BMW Compacts offer an affordable alternative to budding new racers. A fully race prepared vehicle can be achieved for as little as £4000. The series has taken off down south and today was a showcase to the Scottish racing fraternity that there are new classes on the horizon. Despite some great pace yesterday in practice the BMWs couldn’t quite get going on the wet Reverse Circuit and had to play second fiddle to the Fiesta ST of George Orr who took a brace of wins.

Another competitor to secure two race wins today was Classic Sports and Saloons racer Robert Marshall. It’s worthwhile to note that Marshall has been undefeated all season, winning every class race he has entered this year. Morgan racer Andy Smith, with whom Marshall shared the Scottish title, had a similar record heading into this weekend, but the Renfrew man finally succumbed to the Reverse Circuit losing his 100% record.

You can find all the results from today here!

“It’s been a steep learning curve for most of the competitors today.

“But you can’t help admire their commitment and enthusiasm for racing, they put on a great show, albeit in some pretty tough conditions.

“We’re delighted with the racing that the new layout has provided today, it has whet the appetite for next season, we can’t wait for it to get started!”

We’d also like to thank everyone who has helped with the Knockhill Motor Sports Club events this year. Without the help of officials, medics, marshals, time keepers, sponsors (Beatson’s Building Supplies), competitors and fans, we wouldn’t be enjoying events like today.