Gordon ‘Flash’ Shedden will be celebrating the biggest achievement of his racing career this evening, after securing the 2012 Dunlop MSA British Touring Car Championship. The Honda racing driver had a nervous weekend at Brands Hatch before a second place finish in the penultimate race secured a famous win. 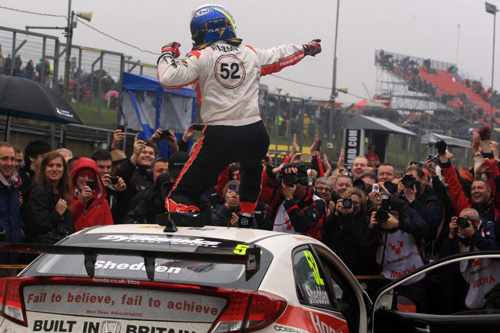 Shedden now adds his name to an elite list of Scottish racers who have taken victory in the highly competitive championship. Indeed, you have to go back to 1995 for the last Scottish BTCC Championship win of John Cleland.

Shedden has always spoken of his love for the BTCC and reiterated that today:

“I can’t believe it.

“ It’s always been about the BTCC for me, l feel very privileged to have been able to race in this championship, but to be standing here Champion, it’s unbelievable.

“The guys were telling me on the radio that l had won it, but l didn’t think l had done enough, to tell you the truth, it still hasn’t hit me,” concluded Shedden.

No doubt there will be a lot of congratulations heading Gordon’s way over the next few days. We’d like to add ours to a colleague who has been a true embassador for Scottish motor sport and indeed, Knockhill Racing Circuit for many years.

Well done Gordon! Hopefully we’ll see you back at work this week… at some point 😉

For all the latest reaction please do check out the Official BTCC website.