Gordon Shedden returned to Knockhill yesterday after his career defining BTCC title win at Brands Hatch last weekend. In recognition of his achievement he received a special accolade on his return to the Circuit… 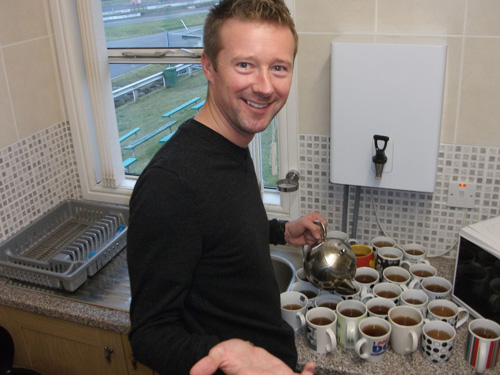 “I fully expected a warm reception on my return to work today, but this just takes the biscuit,” laughed Shedden.

Shedden admitted that the reaction since he became only the third Scot to win the British Touring Car title has been unreal.

“It’s still hard to believe, even after all the attention of the past few days.

“My phone has been going constantly and the reaction in the media and via social media has been staggering.

“Although, l do wonder if Button and Hamilton had to make the respective teams tea when they won their World Championship crowns.”

“Thank god Championships are only decided once a year, because racing drivers just can’t make a decent cup of tea.”

“It just goes to show that there are no airs and graces with Gordon, he’s a great sport, a great competitor and a very worthy champion indeed.”

If Shedden goes on to successfully defend his BTCC crown next year, he’ll receive another special accolade…

Note: No BTCC Championship winners were harmed or offended in the making of this story!