Heading into a weekend when five Championship titles would go to the wire, everyone here at Knockhill expected fireworks, and that’s exactly what we got, when the Scottish Championship car racers took to the track for the final time this year. 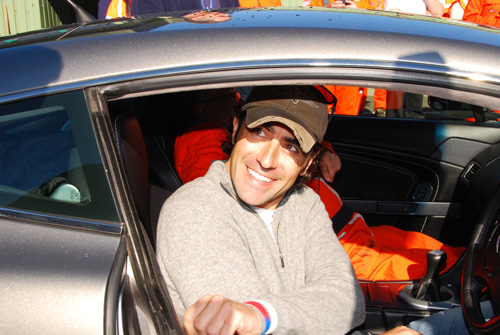 IndyCar legend Dario Franchitti was also on site to witness, what was a thrilling climax to the 2012 season. Franchitti , made himself available to sign autographs and pose for photos throughout the day. He even had some time to get on track, takings a few lucky marshals round the track for some super-fast flying laps behind the wheel of the Knockhill Driving Experience, Aston Martin. Franchitti had also brought along his own 1999 Raynard Honda IndyCar for the Scottish racing fans to see. Perhaps it’s not the only time we’ll see an IndyCar at Knockhill with Dario behind the wheel.

“It’s brilliant to be back, it would be really good if Honda could give me the internals for the ‘old girl’ and we could get an IndyCar on the Knockhill Circuit.

“I would of course have to do it behind closed doors just in case l crashed,” laughed Dario.

“There’s been some great racing here today, the weather has been really good and l’ve even learned a few things too,” concluded Franchitti.

Dario’s next Scottish Motor Racing Club appointment will be at the Annual Awards Dinner in December. Where he will no doubt be handing out some of the Championship trophies to some of the racers he was watching today.

The most remarkable victory of today would have to be Carol Brown’s Legends Championship win, the 2nd of her career. She had trailed Ross Marshall by ten points heading into the weekend and secured an opening race win to move to the top of the Championship. Marshall though had pulled together a sensational drive, coming through from 15th on the grid to finish 2nd in the first race. Brown, under massive pressure would then repeat Marshall’s feat in the second race with an equally impressive drive, coming 2nd behind her team-mate. 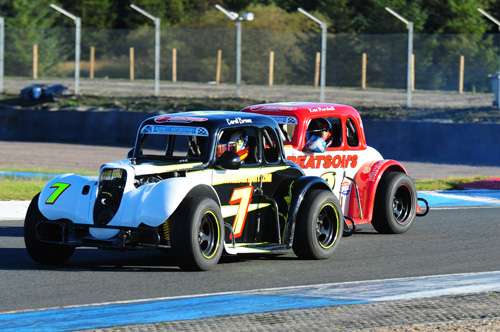 So heading into the final race of the season, whoever won the final race, would win the title. Both racers lined up at the back of the grid, but within a few laps had forced their way to the head of the field. The pair raced side by side for a number of laps, Marshall applying severe pressure all the way. Ultimately it would be a mistake on the final lap that gave Brown the advantage she needed to finish off the race and win the 2012 Legend’s title. It was a fitting race to end any championship battle and a refreshing sight to see both racers racing at close quarters in such a respectful and entertaining manner.

The other winners on the day included Peter Cruickshank taking his first XR2 Championship title after a long 15 years wait. Garry Watson became the first competitor in SMRC history to win three Championship titles in successive years by winning the Scottish Sports and Saloons series. In the Classic Sports and Saloons Championship, both Robert Marshall and Andy Smith continued winning ways taking another brace of wins each. They remain deadlocked at the top of the overall standings and by popular demand look set to share the title honours between them. Elaine Marshall managed to secure the Mini Ladies Cup, whilst Dave Colville secured the Fiesta ST Championship by taking two third placed finishes today.

“It’s been a great end to a good season at Knockhill today.

“We’ve had it all, drama, intrigue, excitement and some phenomenally good drives throughout the classes. And of course, having Dario Franchitti at Kncokhill today was the icing on the cake,” said Knockhill Events Director Stuart Gray.

For all the latest reaction from a thrilling SMRC event, check out their official website.

We’ve also uploaded a huge selection of photos from toady that are available on the Knockhill Photobox page.

We’d also like to announce that our new Official Branded Merchandise store is online now, please do go and have a look.

Last but not least, we’d like to thank all the fans, officials, marshals, racers and support staff for a thoroughly entertaining day. We’d also like to say a huge thanks to Dario for coming along today and to Graham Brunton Racing for all their hard work getting Dario and his 1999 Raynard Honda to Knockhill today!

October 7, 2012
Events Blog No comments Events
← Nightmare BTCC quali for Shedden From Knockhill to Silverstone in 24 hours…on a bicycle! →