The 2013 Scottish Championship racing season started with a bang at Knockhill today (Sunday 7th April). Up to 110 competitors split across 8 racing classes descended on the Fife venue to kick off their 2013 championship assaults. The first event in any season is always one for firsts, with new competitors starting their careers, various drivers switching classes and new vehicles being unveiled by their eager drivers.

Another first, was the debut of a new racing series to hit Scotland, the Marangoni Tyres Scottish BMW Compact Cup. This new affordable racing series offers a great entry route into motorsport and has had a fabulous up-take south of the border. The Scottish scene saw a former Stock Car and Formula Ford Champion dominate proceedings, with St. Andrews racer Alan Kirkcaldy sweeping all aside to record a brace of wins. 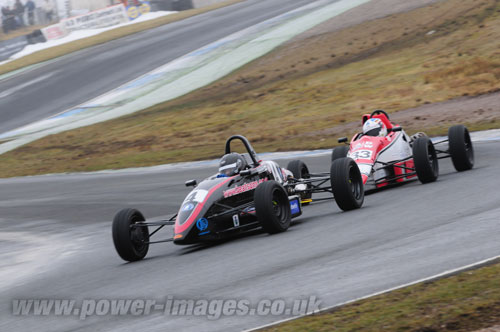 Another racer making their competitive debut today was 16 year old single seater racer, Ciarran Haggerty.  The young Johnstone man managed to pilot his Ray GRS09 machine to a mighty impressive podium position in the opening race. He subsequently followed that performance up with another strong display in the day’s final race.

“It’s very different to what l’m used to but l had a great time, and a good race with Jordan (Gronkowski).

“I took the first few laps easy and then started to push after that,” commented the teenager.­

Elsewhere Ross Mickel had the perfect start to his 2013 championship season, taking all three wins and a maximum 600 point score in the Scottish Legends series. Mickel, has never won a Scottish Legends Championship and without doubt, will be highly confident that this could be his year after such a strong showing here today. 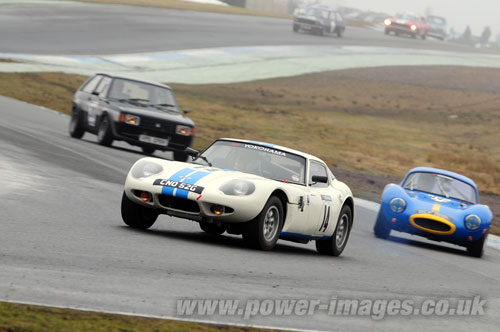 Paul Brydon had a great start to his season behind the wheel of his BMW M3 by taking a brace of wins in the Scottish Saloons and Sportscar Championship.  Brydon’s feat was matched by Stuart Thorburn after his two race wins in the Formula Ford Championship. Thorburn has now won a Formula Ford race in each of the past three decades, a great achievement by the Duns man.

Defending Mini Champion David Sleigh returned to the track knowing that with four former champions in the Celtic Speed Mini Cooper Cup field, he’d have to be on top form to reign supreme this season. He took the opening race with relative ease ahead of stable-mate, Joe Tanner. However, in the second and third he had to muscle his way past Kenny Thirlwall, himself a former Mini Champion, to secure all three Mini race victories.

“It’s been a great day, extremely busy which is great for the Scottish motor racing scene. The action on track has been entertaining and highly competitive which bodes well for the rest of the season.

“I’d obviously like to take this opportunity to thank all those people who dedicate their own time to ensure these race meetings take place, marshals, officials and of course the spectators for braving some cold temperatures here today.”