Reigning Fiesta XR2 Champion Peter Cruickshank will take to the track again at Knockhill Racing Circuit on Sunday. Peter, from Lundin Links in Fife, will compete in the Fiesta ST Championship this season, after racing in the XR2 Championship for 15 years.

Unusually, Peter’s car will display the number 1 – in spite of this being his first season in the Fiesta ST Championship. As a sporting gesture, last year’s Fiesta ST Champion Dave Colville agreed that Peter could be Car 1, recognising his many years of dedication to the sport in the XR2. Colville will keep number 52 for this year. 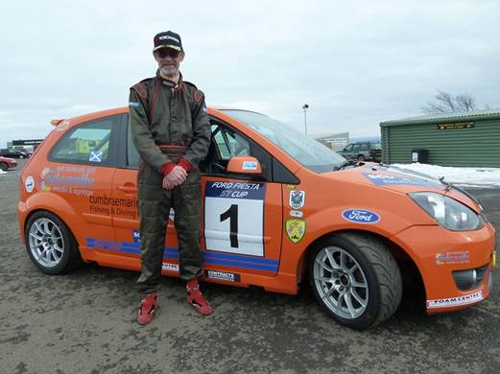 Peter said, “I’m very much looking forward to it, it took me a long time to eventually get the trophy in the XR2 Championship, and I’ve watched the quality of the drivers improve through the years that I’ve been doing it. It seems to me now that the cream of the Fiesta drivers are now moving into the STs and I think that’s where I need to be for this coming season.

“I watched the ST racing last season quite closely because I was usually the first car behind the STs and I was very impressed, not only with the closeness of the racing, but also the fact that it looked very clean. I think there’s a number of experienced and quick drivers in the STs now and I think it shows in the quality of the racing, the closeness of the cars in terms of speed, but also the fact that they can race very closely together without having any untoward collisions, accidents of that sort. It’s a good place for an older driver to be.”

The Championship kicks off with the Jim Clark Memorial Meeting at Knockhill Racing Circuit on Sunday 7th April. Racing begins at 11am and the action-packed 15 race programme includes Mini Coopers, Legends, Formula Fords, Classics, Modified Sports and Saloons, Ford Fiestas and the first round of the new Marangoni Tyres Scottish BMW Compact Cup.