The Scottish Motor Racing Club returns to Knockhill Racing Circuit on Sunday 5th May for round two of the SMRC Scottish championships. The event is named in memory of, and tribute to, Maggie Miller, wife of reigning Ford Fiesta XR2 champion and now ST racer Peter Cruickshank, who sadly recently passed away. Maggie, for many years, was a colourful character in the paddock and writer for the Club magazine. The meeting will feature a triple header race for the Peoples Ford Scottish Fiesta and ST championships, in association with Yokohama and Wheels Around, and has attracted a number of former champions back to add to the quality and depth of the Ford races. 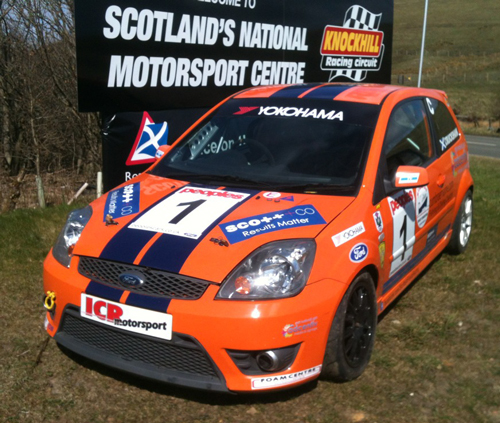 In addition to reigning XR2 champion and ST racer Cruickshank from Glasgow, reigning ST Champion Dave Colville and Edinburgh’s Ollie Mortimer (who went on from his Ford Fiesta driving to become a multiple Mini Cooper championship winner), former ST champions Rory Bryant from Dalmany and Glasgow’s XR2 champ Scott Fraser will be joining in for this special event.  The action-packed 15 race programme which includes Mini Coopers, Legends, Formula Fords, Classics, Modified Sports and Saloons, and the triple header for Ford Fiestas and ST’s, also features the second round of the fastest growing championship in Scotland, the Marangoni Tyres Scottish BMW Compact Cup.

Stuart Gray, Events Director at Knockhill, said, “We are really looking forward to round two of the SMRC championships on Sunday, following on from a bumper meeting at the start of April. The atmosphere and crowd was really thrilling for all those taking part and the racers certainly provided plenty of entertainment all those spectators that turned out. The naming of the event after Maggie is entirely appropriate. Not only because Peter (Maggie’s Partner), campaigned his Fiesta XR2 for numerous years, before eventually winning the title last year and moving forward into the ST class. But also, this round will see a triple header for the Fiesta racers, providing the class with top billing this weekend.”

The Ford theme continues with the highly competitive Scottish Formula Ford Championship with Borders Reiver’s racer, Stuart Thorburn; back to hopefully continue his stunning start to the new season following his two wins at the opening round. The veteran, clinched his double win in tricky conditions giving him the unique claim of winning a Formula Ford race in each of the last three decades. Thorburn knows he’ll be in for a tough weekend against hard charging Jordan Gronkowski (Banff) and young Border Reiver’s stable-mate; Ciaran Heggarty from Johnstone. 16 year old Ciaran, made a highly impressive debut last time out and will no doubt be looking to follow up his maiden podium finish with another strong performance this Sunday.

The action starts with qualifying at 8.30am with the first of 15 races from 11am. Advanced ticket purchases are subject to pre-booking discounts and all pricing information can be found on our event webpage. Kids under age 12 go free and NEW for 2013, kids aged 12-16 years go free if a family ticket is purchased in advance.