Scottish Championship bike racing roars into action for the start of the 2013 season with the Knockhill Motor Sports Club organised race weekend on Saturday 27th and Sunday 28th April. A bumper entry has been boosted by an unprecedented number of new riders taking up the sport for the first time. The action features races from the Scottish Superbike, Superstock 600, Formula 125, Classic, Clubman and Scottish Lightweight classes.

All races are exclusively broadcast on Motors TV giving the riders exposure throughout the UK. Racing starts at 1pm on Saturday 27th April and at 9am on Sunday 28th April with 15 races in store on the main race day (Sunday).

Perth school boy Rory Skinner will become the youngest ever biker to compete at Knockhill when he takes to the track. 11 year old Rory has been granted his SACU Road-Race licence early and will race in the Formula 125 series this year.

Rory grew up around the paddock at Knockhill watching his dad Mike racing. He started racing himself at just seven years old. Rory has won multiple championships and last year became British Metrakit GP70 Champion and British Junior Production Mini Moto Champion, winning 44 of the 49 races he competed in. 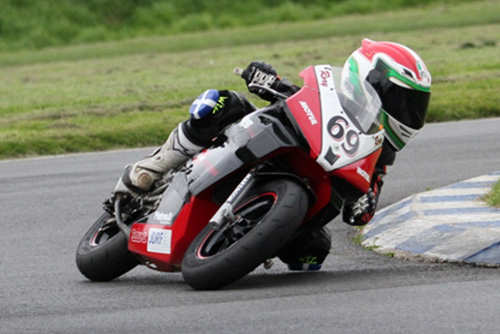 Recently Rory and Mike applied to the Scottish Auto Cycle Union (SACU) for special dispensation for Rory to get his SACU Road-Race licence early given his riding ability and astonishing achievements to date.

Rory sat his SACU test on Saturday 30th March at Knockhill and has now been granted his new race licence. This year he will race in Formula 125 on a GP specification 80cc machine. Rory feels at one with his new bike and can’t wait for the new season to begin.

Adult admission on Saturday 27th is £5 and £12 on Sunday 28th when the first of 15 races starts at 9am. Concessions are £6, under 12s free with discounted advanced tickets available here.