The Scottish Motor Racing Club returns to Knockhill Racing Circuit on Sunday 7th April for the season opener – the Jim Clark Memorial Meeting, which marks the 45th Anniversary of Clark’s death. Racing begins at 11am and the action-packed 15 race programme includes Mini Coopers, Legends, Formula Fords, Classics, Modified Sports and Saloons, and Ford Fiestas. It also features the first round of the new Marangoni Tyres Scottish BMW Compact Cup. The championship opener at Knockhill will feature an extra race for the Classic Sports and Saloons and is a must see for any fan.

Stuart Gray, Events Director at Knockhill, said, “We are looking forward to another exciting season here at Knockhill, following on from the recent successes of Scottish racers on a national and international level. We’re expecting a significantly larger crowd on Sunday which always adds to the atmosphere and the thrill of the racing.”

SMRC Competition Secretary Graham Brunton said, “I’m really excited in the run up to our first SMRC race meeting of the season. Our entries are up on last year so that’s a positive sign.” 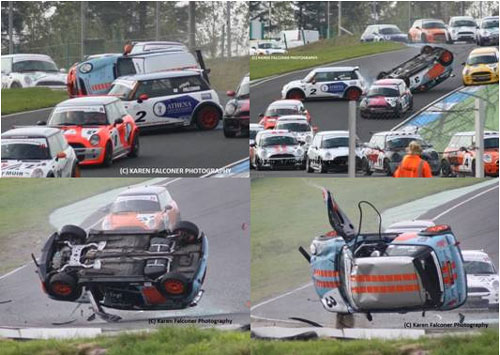 Last year’s SMRC brought plenty of drama to Knockhill. Tim Sleigh’s accident on 12th August forced him to miss out on the next round of the championship. This year Team Sleigh Racing’s exciting new driver line-up includes reigning champion David Sleigh, the only driver ever to have won all three races in one meeting. It also features 16 year old Aidan Moffat who will compete in the Mini Cooper Cup and the Scottish Fiesta ST Championship.

Tickets for the event are available via the Knockhill website (advanced booking discounts apply). Alternatively tickets can be purchased at the gate on Sunday 7th April. On the day ticket pricing is as follows:

Please note we are expecting a larger than usual crowd, so please make sure you arrive at the venue early to avoid any delays.