Before the MSA Monster Energy British Rallycross Championship, in association with MaKTraK, headed to Knockhill this weekend; most of the talk beforehand was of the impending appearance of FIA European Rallycross competitor, Andy Scott. However, it would turn out to be his son (Marc), who would steal all the limelight with a blistering display in the RX150 Championship. Scott jnr., helped himself to three heat wins and overall victory in the RX150 Final, his third of the season, albeit by the smallest of margins from a hard charging Jake Harris. 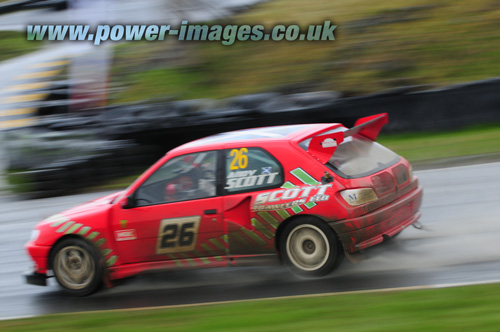 In the Super Car Class, all the top runners had their fair share of woes on an unpredictable day. Pat Doran’s turbo bit the dust literally seconds into the meeting, Andy Scott had his engineers look into misfiring problems and poor Mad Mark (Mark Watson) had a day to forget with clutch, wiper and eventually engine troubles.

One of the major factors in Scott’s eventual Super Car win was his ‘Joker Lap’ strategy. The Dumfries man lagged behind the supremely quick, Pat Doran, until the final lap, but with both Scott and Godfrey having already driven their joker laps; Doran knew it would be a race to the finish. Ultimately as Doran raced towards the finish line after his joker lap, both Scott and Godfrey sneaked past the Citroen DS3 man’s car with the finish line only metres away.

“It’s a fantastic feeling to win, but it’s even better when it’s at your home track. And with Marc winning, it completes a nice family double.” 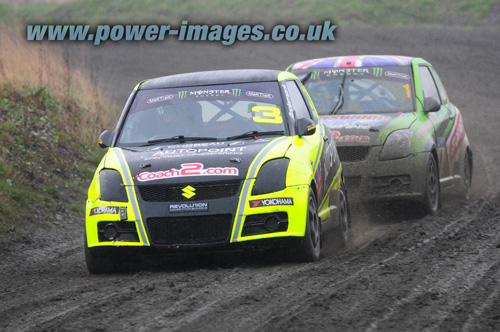 There will be a number of drivers heading away from Knockhill this weekend cursing the ‘Joker Lap’; Graham Rodemark for one. Rodemark had been in spectacular form all day and looked odds on to take victory in the Suzuki Swift Championship. Indeed he led for most of the race until the dying stages (and his joker lap). As he headed towards victory or so it seemed, from nowhere, Chris Mullen flew round the corner and sped over the finish line snatching victory from the bewildered Rodemark left to ponder where it all went wrong. 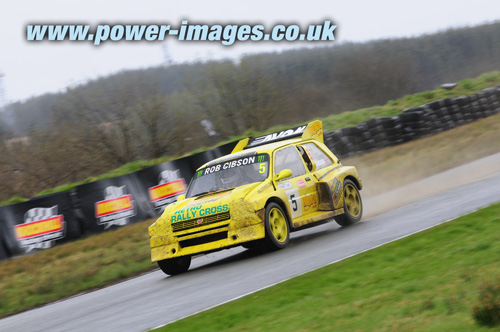 Elsewhere, young Kevin Hansen was the man to beat in the Suzuki Swift Junior class, the Swedish teenager taking multiple heat victories before sealing the overall win with a dominant display in the final. Hot Hatch Super 1600 competitor Russell Simpson was odds on for victory in the class, three class heat wins gave an indication of his dominance, however, the joker lap again played a part in his downfall, with Craig Lomax taking the class victory. Super National victory went to Malcolm Boyd after collisions and spins galore presented an opportunity that the Toyota MR2 driver couldn’t refuse. Tony Lynch took BMW Mini victory, Rob Gibson took a lights to flag win in the Retro Rallycross (1982-1987) class, whilst Lance Forster was the dominant driver in the Retro Rallycross (Pre 1982) class.

“Yet again the British Rallycross competitors have put on a great show, there was spins, tumbles, crashes, near misses and plenty of drama throughout. The weather wasn’t great, but the racing certainly made up for it.

“Huge thanks to the MSA Monster Energy British Rallycross competitors, officials and fans for making the long journey North to showcase their unique brand of racing to the Scottish public.”

Well that concludes our review from today’s action. If you came, hopefully you enjoyed all the thrills and spills that Rallycross has to offer! Have a safe journey home and see you again soon.

All images courtesy of www.power-images.co.uk

You can also see an extended gallery of images on the Knockhill Facebook page.

You can check all the latest news and standings on the official Rallycross website.