The 2013 oval racing season on the unique Knockhill TriOval gets underway on Wednesday 22nd May with a World Qualifying round for the single seater BriSCA Formula 2 Stock Cars. The formula is one of Europe’s biggest racing divisions with around 500 registered drivers in the UK alone. The National Points champion Gordon Moodie hails from Fife & once more Gordon has been travelling all over the country to head the points chart. Moodie also retained his Scottish Championship at Cowdenbeath Racewall recently but starts the Knockhill season as a challenger to Chris Burgoyne who was unstoppable here last year. 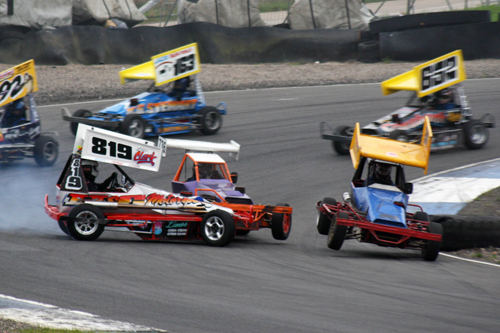 New teen sensation Liam Rennie is another who will make things difficult for Moodie. The Tayside youngster  started this season as a novice but has leaped up the grades & now starts alongside Moodie at the back of the grid (in Stock Car racing the faster drivers start at the rear & have to make their way through the grid to take any glory). Over twenty drivers are expected to be racing in the World qualifier & we hope a few English drivers may make the trip & compete at the Racewall the previous Saturday evening (18th). Points scored from this meeting go towards qualifying onto the World Semi Final grids at Bristol in August. 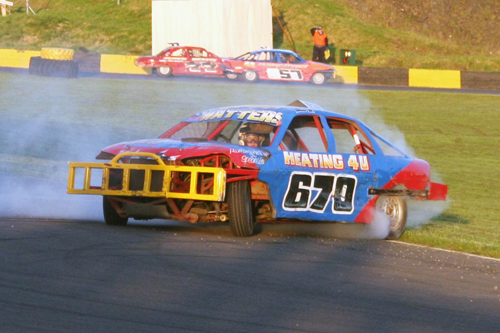 Also racing will be the full contact Saloon Stock Cars. These cars have ironwork throughout the Sierra/Mondeo/BMW based body shell & are allowed, like the BriSCA F2’s, to remove an opponent by spinning them out or pushing them wide into a corner. Often spectacular, these are proper Stock Cars with no holds barred. Again Scotland is proud to have the National Points champion in Stuart Shevill Jnr – a driver who isn’t afraid to mix it out on the track. Stuart’s brother Graeme will also be racing alongside Stevie & Paul Honeyman, Ian & Neil McLaughlan, Stuart Drobinski  & plenty more who will be out to take the silverware home.

The Ministox are a like a junior Saloon Stock Car formula with 10-16 year olds racing ironed up Minis. They may be young but these guys put on a great show & have regularly had over 20 cars on track at Racewall & the racing has been superb with a good balance of racing skill & rival removal from the youngsters. Camie McGowan is the current top man but the likes of Zak Gilmour, Aaron McGowan & Aaron Chidwick are after his titles. Watch the sparks fly! 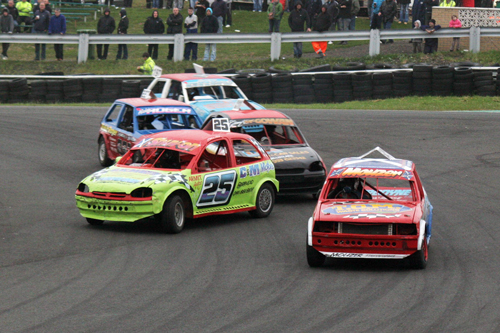 The last of our openers classes are the Stock Rods – the only non-contact formula on the bill. The 1400cc Rods always give great value for money & you won’t see door handle to door handle or bumper to bumper racing like it anywhere else. The top drivers like Gunner Lattka, Kerr Paterson, Mouzer Lattka, Mikey Bethune & co aren’t afraid to go for that outside line & cars lapping side by side trying make that race winning manoeuvre stick are commonplace.

For more information about the Stock Car racing scene in Scotland – click here!

Tickets for this event can be purchased in advance via our Stock Car Racing events page. Pre-booking discounts apply with on the day admission prices as follows: