It looks like a bumper turn out of formula II drivers are heading to Knockhill for the third of the World Championship qualifying rounds over a 5 day period in Scotland. 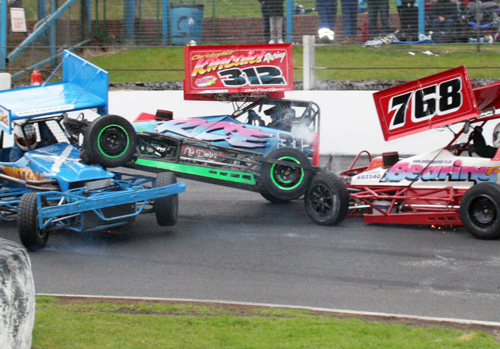 At the Racewall on Saturday night there were cars including the National Points, European and Scottish Champion Gordon Moodie (7). On the grid were past World Champions Moodie and Chris Burgoyne (647) but there were a good few drivers looking to score sufficient points to gain them a semi- final grid position.

Tonight we can expect to see the Scottish drivers out to claim as many points as possible as they chase an elusive semi-final grid spot; MacMillan Jnr, Burgoyne and Sime will be looking to score well whilst Moodie and Dawson could do with a heavy points scoring meeting to boost their points tally.

Again there will be a healthy turn out of south west of England drivers and there is a chance that Tom Adcroft will make the trip from Burnley. With thirty cars already booked in we can expect some fast racing with a few fireworks thrown in for good measure.

Stevie Honeyman (607) will give Shevill Jnr a run for his money whilst Graeme Shevill (661) and Barry Russell (600) cannot be discounted.

In the stock rods the Lattka brothers Chris (658) and Jonathan (647) were the ones to beat last season and there is no reason to think that it will be any different this year. Mickey Bethune (83) is another hard driver to catch and he will be looking for a good night’s racing.

In the minis Camie McGowan (637) is the driver to beat although Zak Gilmour (122) has been giving him a run for his money recently.

The minis have been in good form so far this year and there is no reason to think that their races won’t be full of action tonight.

Tickets can be purchased at the gate; prices are as follows: