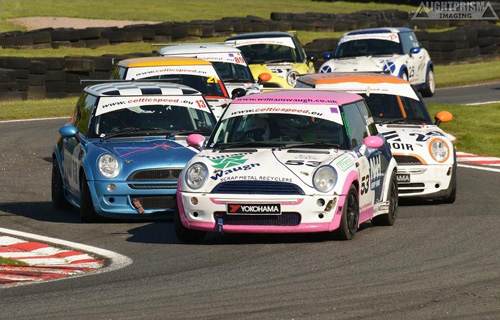 This round will feature an extra race for drivers in the Celtic Speed Mini Cooper Cup Championship, who are sure to provide entertaining racing in all four of their races.

Joe Tanner from Team Sleigh Racing will be hoping for another successful weekend after a strong result in the last round at Oulton Park last month. Following no testing at Oulton Park, Joe managed to qualify third on the grid and stormed to victory in the first race.

After the reverse grid draw he started race two from fifth but managed to climb to second place. Charlotte Sleigh from Team Sleigh Racing said, “Joe is doing great. I think he has a good chance of winning the championship, he is extremely talented.”

Current champion David Sleigh will be giving Joe a run for his money as he aims to win his third consecutive title.  Other members of Team Sleigh hoping for a good result at Knockhill are former BTCC racer Micky Doyle, 17 year old Aidan Moffat, and Malcolm McNab who finished third in the championship last year and won SMRC ‘Driver of the Year’.

Also competing in the Mini Cooper Cup is 19 year old Hannah Chapman who races with Minimax Motorsport. Hannah started karting when she was 14 and this is her first year racing in the Minis. She had her best result to date at Oulton Park where she was the highest lady qualifier and finished best of the Lady Cup competitors in Race 1.

Speaking of her result at Oulton Park, Hannah said, “I think it’s given me a lot more confidence and I learnt a lot. I had a lot of help from Alan Waugh – he helped my team change my engine at Oulton Park and has been mentoring me. I feel more confident now about the next round at Knockhill. I’m treating this year as a learning year and hope to give the Mini Championship a proper go next before progressing further.”

Qualifying at Knockhill starts at 08:30am on 23rd June and the racing action kicks off with the first Mini Cooper Cup race at 10:30am.