With the promise of featuring some of the most popular models ever to come out of the ‘land of the rising sun’, Japanese car fans flocked to Knockhill today to participate in Jap Fest; the second running of the popular themed ‘jap car’ Hot Hatch car trackday. Countless Japanese car owners, not to mention the various other brands that took to the track, made their way to Fife to join in the sunny celebrations. 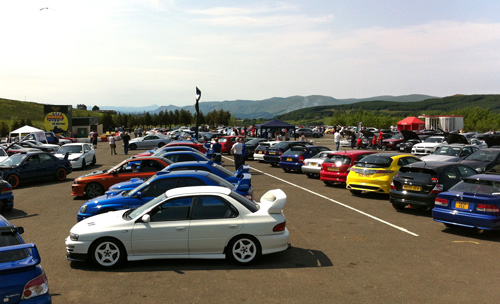 Approximately 130 drivers took to the Reverse Knockhill track, in a multitude of Japanese models from various manufacturers including Mitsubishi, Subaru, Honda, Nissan and Toyota, as wells as models from Citroen, Renault, Peugeot, BMW and Ford; a real mixed-bag of models could be seen darting around the track. At lunch time we even saw a Ferrari 430 join in our free drag competition (and it didn’t win). 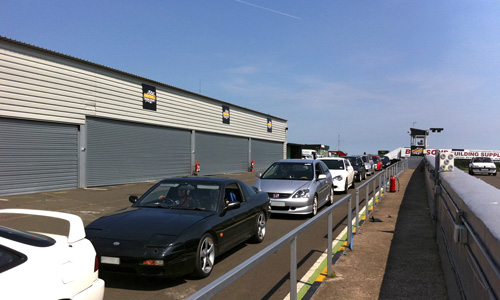 In the paddocks, 200 or so show cars descended on paddock two as car clubs from various parts of Scotland brought their members along for some friendly show and shine competition. Entrants from JDM Scotland, Lude Generation, Ayshire Streetstyle, Clan Japan and Scottish Scoobies could be seen gleaming in the Knockhill sun. Ultimately though, it would be BeTappd who would walk away with the best club stand. Individual honors went to Graham Hill who received the ‘Driver of the Day’ award and his five cases of Nae Danger Energy Drink.

The boys and girls from RA Motosport also came along to support the event today; in the hope that they could encourage a few of today’s participants to head into the competitive arena. As well as competing in the UK wide Time Attack series, RA Motorsport Developments are also title sponsors of the Scottish equivalent, Super Lap Scotland. It’s a very affordable ‘next-step’ if you fancy taking your track driving enthusiasm to the next level, and best of all, you can enter in almost any type of road/track car. For more info on SLS, log onto the official website.

If you have been to Knockhill today and fancy getting a bit more from your car and yourself, newcomers are always welcome at out Hot Hatch events. A full safety briefing will alleviate any concerns you may have about heading out on track. Alternatively, our instructor led, Performance Driving Courses offer one-two-one tuition behind the wheel of your own car on the Knockhill Circuit, away from the prying eyes of your fellow enthusiasts and crowds (weekdays only). It’s a great place to start if you are contemplating mixing it up on track. 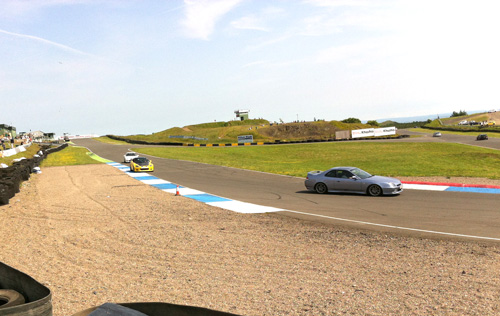 The next Hot Hatch action heading to Knockhill will be the Performance French Car Show on Sunday 18th August. Club entry forms can be found on our event webpage and it looks like the Japanese guys here today have thrown down the gauntlet to all you French owners. Can we make it a bigger and better event next time out, quite simply, not without your support and enthusiasm. Track driving spaces can be booked via our trackdays section and event tickets can be purchased here.

Remember, booking either spectator tickets or tracktime in advance saves money!! So book now and don’t miss our French themed event in August!

P.S. Thanks for coming and turning out en-masse to represent the Japanese scene here in Scotland.