At every round of the Scottish Motor Racing Club’s events this year, one class has taken feature billing and this weekend it was the Scottish Legends who would take centre stage. The Legends competitors had to endure a gruelling six race programme in sweltering heat around the 1.3 mile championship circuit. 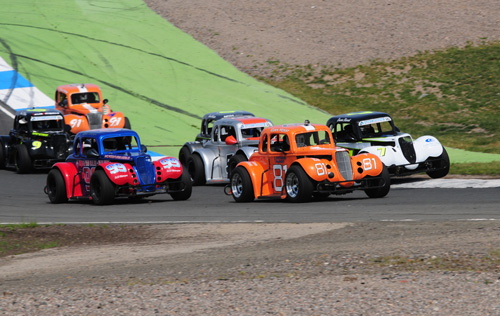 Knockhill Fm host, Duncan Vincent took the opening race win aboard the Carol Brown Legend, although Vincent would later relinquish the vehicle back to Brown; that still left the Glenrothes man enough time to secure the ‘Driver of the Day’ award for the first trio of races, which also included a third place finish. David Allan then went on to secure the first of his three race wins, in the second outing; before notching his second and third in quick succession. Championship leader, Ross Mickel pulled together another strong weekend which included one race win and three other podium scores. That consistency landed him the “Driver of the Day” for the second round of Legends races, before David Newall crossed the finish line first in the final outing of the day. 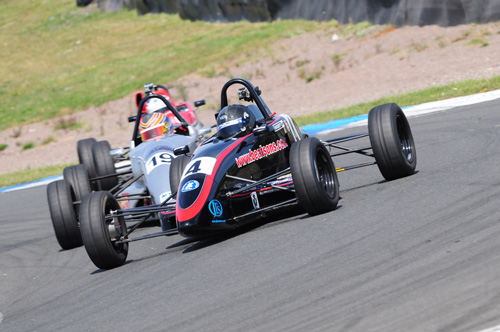 International racing star, Ryan Dalziel made a surprise trip to Knockhill today to check on the progress of his young karting protégée, Ciaran Haggerty. The 16 year old has had a promising start to his car racing career and Dalziel headed to the circuit in the hope of finally seeing the youngster secure his first win. However, fellow teenage racer, Michael Gray had other ideas. Gray had already secured the first race win, before the duo traded pass for pass on track in the final outing. It was great to see two young racers go head to head, before a mechanical failure on Haggerty’s car robbed the crowd of a rousing finish. Stuart Thorburn and Paul Kopec were the other podium scorers in an eventful Formula Ford 1600 Championship meeting. 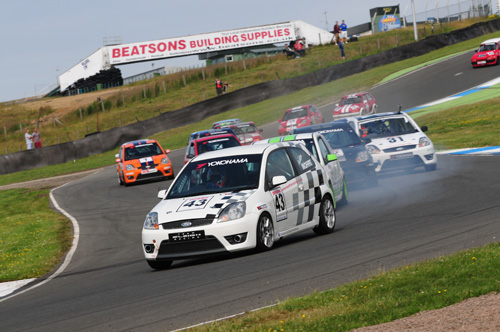 Another young-gun setting a blaze on the Scottish Motor Racing scene is Fiesta and Mini racer, Aiden Moffat. The youngster endured a massive shunt at the last round and lined up on the grid for the opening Peoples Ford Fiesta Championship race in a different machine. That shunt has ironically aided Moffat’s chances, as the subsequent change in machinery has given him a car with greater straight line speed.

“That crash has actually helped me out in a way, the car l have now is actually faster than the one l crashed last time out. Hopefully that will help me secure more results like today,” said Moffat after securing his two race wins today.

Scott Robertson and George Orr took the other podium positions in the two Fiesta ST races and maintain their positions at the top of the points table. In the XR2 Championship, Wayne Macauley could only watch as his 100% record for the season came to an abrupt end. Hamish Smart stole ahead of the Forfar racer to seal his first two race wins of the season. Macauley did have one second place finish to celebrate, as did Grant Anderson; whilst, David McNaughton helped himself to two third place finishes. 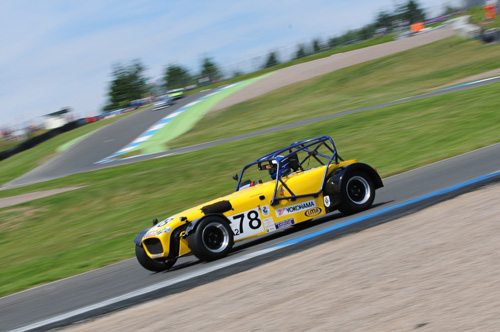 In the Sports and Saloons series, David Headen powered his Caterham to two race wins ahead of Ryan Magennis and Graham Davidson. Alan Kirkcaldy continued his winning ways in the BMW Compact Cup with another brace of wins, while and Stuart Haston took both victories in the MX5 cup.

The big news in the Classic Sports and Saloons series was that Robert Marshall’s 18-month long winning streak finally came to an end; as his impeccably prepared Escort failed to complete the second of his two race outings this weekend. That left the door open for the long suffering Jimmy Crow to finally leap onto that top step of the podium after a very long wait. The on-the-road victories were taken by Tommy Gilmartin in his Morgan +8 (x2), closely followed by Harry Simpson in his Ginetta G4 (x2) and Raymond Boyd in third (x2).

The Celtic Speed Mini Cooper Cup races ended in spectacular fashion, with David Sleigh’s mini on its roof at the first corner following a high speed collision with Vic Covey Junior. Indeed the Mini racing offered its usual mix of thrilling entertainment and close racing action. The Championship is so tight at the moment and it looks highly likely that the championship will down right down to the wire already. This weekend saw 6 different racers on the podium and three different race winners. Joe Tanner still leads the Championship, but expect plenty more twists and turns before the season is out.

The Scottish Motor Racing Club head back to Knockhill on Sunday 11th August, hopefully we’ll see you all here again and thanks for coming along today.

More images from this meeting will be online shortly at www.power-images.co.uk

July 14, 2013
Events Blog No comments Events
← John Bushby – the man, the marshal, the legend (driver)! On your bike this Saturday for Charity ride test? →