Stock car racing makes its penultimate visit to Knockhill this Wednesday evening (24th July), with only the British Championship double-header to come in August. The racing has been superb all season long, with bumper crowds enjoying the hot summer evenings at the tri-oval circuit. 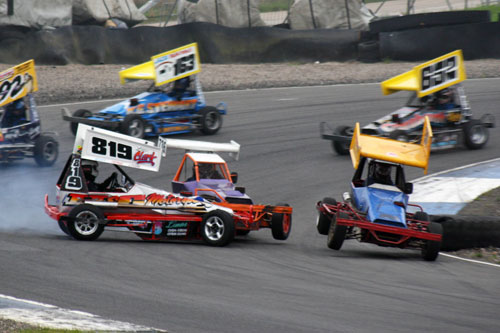 This time around we have the added bonus of featuring a round of the GP Midgets with competitors vying for the Tourist Trophy. The Midgets should provide plenty of entertainment on the fast oval circuit, the hairpin however; might prove to be rather troublesome and no doubt there will be plenty of incident to compliment the fast racing action.

BriSCA F2 racing again tops the bill, with their last venture onto the Knockhill tarmac this season. Gordon Moodie currently leads the points standings although he know all-to-well that it’s a straight three-way fight for the title between himself, Robbie Dawson and Chris Burgoyne. The top three racers will also be well aware that a number of other drivers have shown well at Knockhill this season; making for a thrilling evening’s entertainment. 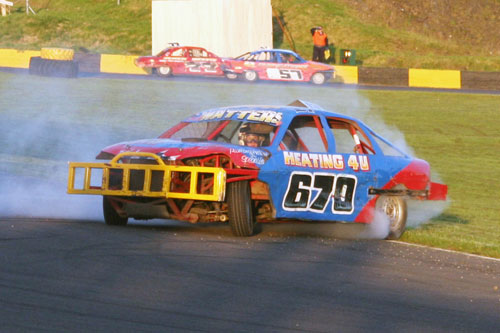 The Saloon Stocks will again feature prominently with Ryan Muirhead and Gordon Alexander sporting new machinery for the occasion. Stuart Shevill Jnr. will also be competing in slightly different machinery, he’ll be using his brother’s car whilst his gets prepared for the upcoming World Championship at Racewall in August.

Also on the Knockhill schedule will be Lightening Rods with Paul Winfield coming to Fife on the back of some strong results. Ministox racers will be going all-out to win the Hairpin Trophy with Camie McGown and Zak Gilmour looking to fend off the impressive Steven Burgoyne.

Action gets underway at 6.30pm with the action set to conclude around 9pm. Tickets can still be purchased at the advanced discounted rate via the Knockhill website until midnight on Tuesday. Tickets will also be available on the gate (open from 5pm on race day).

All ticket pricing info can be found on our Stock Car Summer Series web page! For more about Stock Car racing in Scotland check out GMP Scotland.