Gordon Robertson, the long time Chief Instructor at the Knockhill Skid Centre and now Chief Driving Consultant at the Porsche Experience Centre, Silverstone, has had a tough 18 months because of cancer. Determination to create something positive from the negative has inspired him to head a charity appeal that will not only raise funds for one of the UK’s leading cancer research facilities, but will also celebrate the 50 Anniversary of the most iconic Porsche of them all – the 911.

Gordon’s journey this week started early at Knockhill as he set off on an epic and memorable journey visiting nine race tracks en route to Goodwood. Gordon said, “”I wanted to say ‘thank you’ to the extraordinary people who have helped us along the way. To do this, me and the team at Porsche GB in Reading have planned ‘The Long Way Doune: Porsche 911 50th Anniversary Charity UK Tour’. With Lucy my daughter in the passenger seat, I will pilot the 1965 Porsche 911 Project 50 race car from our home in Doune, Perthshire, to the first circuit, Knockhill and onwards to Goodwood Racing Circuit in Hampshire, visiting nine of the UK’s finest racing circuits in three days. We will be joined by various VIP guest drivers along the way making this a truly remarkable journey.

Scottish Porsche Cup star Rory Butcher helped see off Gordon and Lucy from Knockhill on Monday morning, with The Stig meeting them at Outlon Park, TV presenter Vicki Butler-Henderson also lending her support. F1 star and acquaintance of Gordon’s Mark Webber dropped in by helicopter at the Porsche Centre at Silverstone to wish him and Lucy good luck. Be sure to see the full story of Gordon and his fund raising on http://www.justgiving.com/longwaydoune. Everyone at Knockhill wishes him and Lucy great luck and good fortune in their help to fund raise for the research. 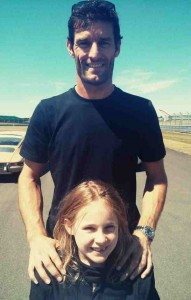 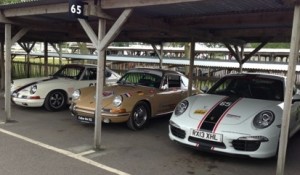