Scottish Championship car racing returned to Knockhill today (Sunday 15th September) and despite some forgettable weather, in-which we saw multiple seasons one day, the action on track was as intense and dramatic as usual. This round saw the Formula Ford 1600 Championship take centre stage with three races for the single seater racers and it will be Jordan Gronkowski who leaves this evening as the happiest competitor in the series. 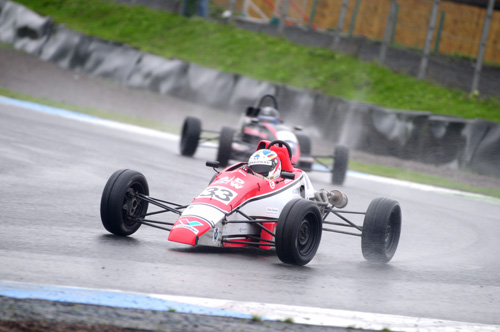 Vector driver, Michael Gray headed into this weekend as the Championship leader with a 10 point lead ahead of Border Reiver’s racer, Stuart Thorburn; however, it was Gronkowski who would eventually enjoy some good fortune around the 1.3 mile circuit to record a brace of wins, including a David Leslie Trophy win in the final outing of the weekend. A difficult weekend for Gray; hampered by handling problems in the damp conditions allowed Thorburn to close the gap at the top of the standings, with both racers now locked on 233 points apiece heading into the final round of races in October.

Young racer, Ciaran Haggerty secured his second race win of the season during the opening encounter of the day. That result, alongside some strong podium finishes means that a four-way tussle between Haggerty, Gray, Thorburn and Gronkowski will ensure a dramatic conclusion to the 2013 season. 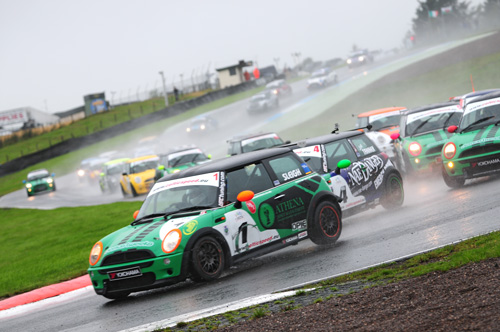 In the Celtic Speed Mini Cooper Cup races, the leading trio of racers shared the winning spoils between them today. Joe Tanner, David Sleigh and Kenny Thirlwall all secured one win each, which now leaves both Tanner and Thirlwall separated by a mere 5 points at the top of the standings. Defending Champion, David Sleigh, now requires a monumental effort in the final outing of the year to retain his Mini Cooper Cup title for another year.

BTCC rookie, Aiden Moffat was the star man in the Peoples Ford Scottish Fiesta Championship series today, taking two wins; despite some tough competition from former Mini Champion, Oliver Mortimer and 2013 XR2 Champion, Wanye Macauley. Macauley, entered the ST Championship races behind the wheel of the Fiesta ST he will race in 2014 and secured himself a number of creditable podium finishes. Current Fiesta ST Championship leader, George Orr suffered another frustrating weekend, but will be mighty relieved to still be heading the standings by 24 points moving on to the final round in October. Meanwhile, Grant Anderson and David McNaughton laid down their markers for a XR2 Championship challenge in 2014 with one race win each. 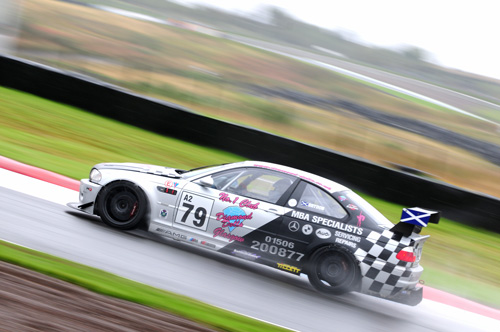 As the SMRC organised Championships look forward to their final outings of the year, with only two Championships already decided, it will be all to play for when Scotland’s car racing fraternity return to the track on Sunday 6th October.

We’d like to close off tonight’s blog by thanking everyone who attended Knockhill today.

See you all in October for what will be a superb season finale. You can book your tickets right here!