On Sunday 8th September, Stock Car racing makes its final visit to Knockhill this year with a four-formula spectacular; featuring Saloon, Stock Rod, Hot Rod and Mascar racing around the Knockhill tri-oval circuit. A number of classes will be gunning for the King of the Hill trophy, with the Hot Rod racers eyeing vital World Championship qualification points. 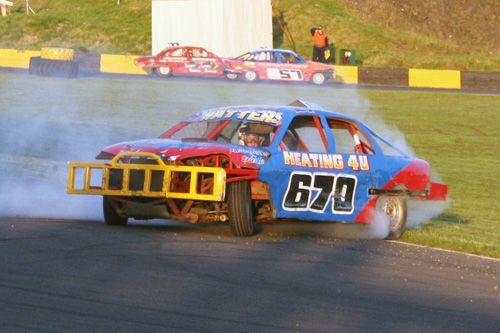 Saloon Stock supremo Stuart Shevill Jnr., sports no less than three separate championship colours on the roof of his saloon racer (World Championship Gold, National Points title holding Silver and his latest triumph, a Scottish Championship title represented by the blue Saltire). The Saloon Stocks should have a little added spice this weekend, following an incident between Honeyman and Shevill; which left the latter firmly planted into the Cowdenbeath race wall. That battle may spill onto this weekend activities although there will be other racers looking to get the wins at Knockhill, including Graeme Shevill, Ian McLaughlin and Barry Russell. 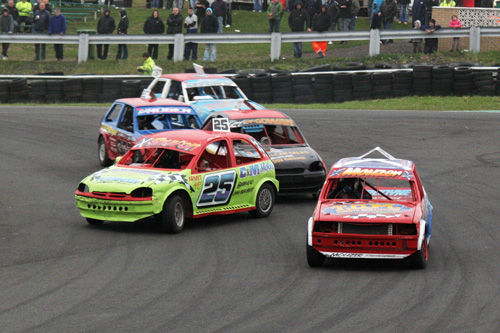 This weekend may also see a number of National entries, including the 2013 Stock Rod World Champion, likely to make the Knockhill event after racing at Racewall on Saturday. The Lattka brothers (Chris and Jonathan) remain the dominant duo at Knockhill in the Stock Rod class, however, Michael Bethune, Alasdair Roger and Kerr Paterson have the potential to overcome the duo.

Mascar racing makes another venture to Knockhill this year and regularly provides entertaining action on track. The diminutive racers are scaled-down versions of the American Nascars, often painted to resemble the real thing. 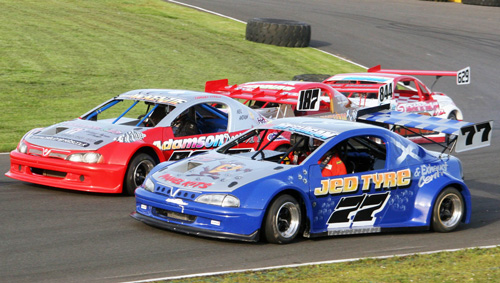 The fourth and final class to be competing this weekend is the National Hot Rods, who’s racers will be looking to secure World Championship qualification points to ensure they make the Ipswich World Final next July. Local driver, Billy Bonnar has been the man to beat for the past few years and he will again be at the forefront of the action at Knockhill. A strong field including 2012 World Final qualifier, Ian McGuigan; John Sibbald and Ian Donaldson will ensure plenty of close racing action for all the fans who make their way to Fife this Sunday.

Action will start at approximately 1pm and continue throughout the afternoon, eventually concluding around 6pm. Tickets for the event are available now with on-the-day pricing as follows:

Tickets purchased in advance via the Knockhill website will be subject to pre-booking discounts. Alternatively, tickets will also be available on the gate (open from12pm) on Sunday 8th September.