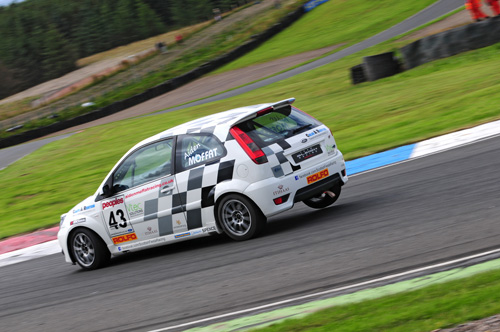 The 16-year-old became the youngest ever BTCC driver when he contested his home round at Knockhill in a S2000 Chevrolet Cruze last month and he will now make an immediate graduation to NGTC machinery.

The Passat was most recently driven by debutant Andy Wilmot at Rockingham, who scored a best result of 18th in both races one and three, but the car had previously reached the podium in the hands of Tom Onslow-Cole.

Onslow-Cole highlighted the potential of the car with a double rostrum at Thruxton, before he backed-up that promise with another third place finish at Croft in July. With the 26-year-old having now moved on to pastures new, young Moffat has seized upon the opportunity to join the upper ranks of the BTCC.

Moffat raced for Finesse Motorsport in Scotland, but the S2000 Chevrolet suffered a number of mechanical woes and the teenager’s camp decided that a change of equipment was paramount in order to aid his progress in the championship.

Moffat will test the car for the first time at Brands Hatch tomorrow (Friday) and will keep the #16 on his new machine for the remainder of the season.

Team HARD boss Tony Gilham said: “Aiden is a real star of the future in the BTCC. We’ve been talking to him for a while and we’re delighted to be able to give him this opportunity for the rest of the season. He showed good promise at Knockhill but unfortunately the reliability wasn’t there in his car. We hope to change all that by providing a reliable and quick car for him show his potential. There’s no pressure on him but we’re excited to see how he gets on before hopefully building a long-term relationship.”

September 19, 2013
Events Blog No comments Events
← Streetcar and British Drifting event – set to be the biggest yet! Streetcar and BDC event enjoys some smoking action →