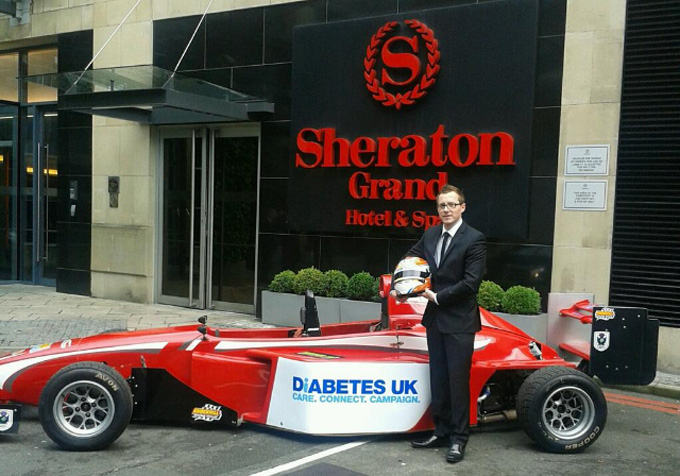 Craig, who lives with Type 1 diabetes himself, spent yesterday at the hotel with his 2 seater racer to promote the charity’s forthcoming Hummingbird Ball.

Diabetes UK Scotland is a cause close to Craig’s heart – having been diagnosed with Type 1 at the age of 14, Craig has had to work extremely hard to pursue his career in motor racing, pushing his way through stringent medicals to become Scottish Formula Ford Champion in 2010.

Type 1 diabetes is a condition where the body cannot control the amount of glucose in the blood because of a lack of the hormone, insulin, which is usually produced naturally in the body. Insulin helps cells absorb glucose where it is converted into energy, and a shortage of insulin therefore causes glucose to build up in the blood.

In Craig’s case, this means that he needs to inject himself with insulin four times a day, and carefully monitor his blood glucose levels to ensure that he is capable of racing his car at speed. He has had to travel around the UK to see medicals experts and prove his fitness to drive and compete.

Craig spends his working week as a driver coach and also spends time instructing on the Knockhill Supercar Experiences. Craig hopes that his success in the field will inspire others living with Type 1 diabetes to pursue their dreams. To show his support for Diabetes UK Scotland, the leading charity which cares for, connects with and campaigns on behalf of people living with diabetes, Craig has had his car branded with the charity’s logo.

Sara Ling, Fundraising Manager with Diabetes UK Scotland, said: “We are delighted that Craig is showing his support for our charity like this. He’s a wonderful example of what can be achieved whilst living with Type 1 diabetes, and we’re thrilled that he will be one of our distinguished guests at the 13th Annual Hummingbird Ball”.

The Hummingbird Ball, which will be held at the Sheraton Grand on November 2nd, is organised by Diabetes UK Scotland’s Edinburgh Voluntary Group and raises money to further research into the causes, treatment and prevention of diabetes. It has raised more than £250,000 since the year 2000.

The Ball will also be attended by Richard Lane, Chairman of Diabetes UK, one of the first people in Britain to have pioneering surgery to have pancreatic islet (stem) cells from three organ donors put into his body where they began to secrete insulin, relieving him of the symptoms of diabetes.

Find out more about Diabetes UK Scotland via their official website.