As with most season ending events, there will be those sitting this evening toasting the successes of the season just past and there will be those left pondering – what might have been; following one of the most intriguing and climatic conclusions to a Scottish motor racing season in recent memory. With that said, everyone at Knockhill would like to toast every individual who has participated or contributed to yet another memorable season’s racing at Knockhill. It is the dedication of competitors, their support crews, marshals, medics, officials and fans; that are the lifeblood of Scottish racing. So, thank you!

On track, a recurring theme has shown through all season – the battle between the established order, and the up and coming teenage racers. This was evident in the Scottish Formula Ford series which saw both Michael Gray (19) and Ciaran Haggerty (17) push their more experienced counterparts to the very end. Gray in particular, had managed to manoeuvre himself into Championship contention heading into this weekend. As joint Championship leader, Gray knew that he would have to out fox Stewart Thorburn if he was to clinch the first senior Scottish title of his fledgling career. But despite his best efforts, Gray had to play second fiddle to the Border Reivers racer as he secured the second Scottish Formula Ford 1600 Championship of his career. Two second place finishes, behind the speedy Jordan Gronkowski, were enough to give Thorburn the win.

There is a lot to be said for experience. And it is that trait that Peoples Ford Fiesta ST Champion, George Orr will be toasting this evening. Orr had to endure a difficult second half of the season, as he watched young, teenage racer, Aiden Moffat; lay siege to the Ford Fiesta race winning rostrum. The Fiesta, Mini and BTCC sensation amassed an impressive 9 race wins this season, and looked odds on to complete a remarkable season debut, with a championship win. Orr, however, admittedly produced the best drives of his season to bag two podium finishes; that ultimately saw him claim the overall title win. Make no mistake, Moffat’s star is rising! But this evening belongs to ‘experienece’ and both Orr and Thorburn, will raise a glass to that.

In the Classic Sports and Saloons series, the Championship came down to the wire for the 2nd year in succession. This time around though, 2012 winner Robert Marshall would have to fight it out with Tommy Gilmartin for the overall Championship win. And despite Marshall, winning all bar one of his races this season; still saw Gilmartin amass enough points to secure a famous win. 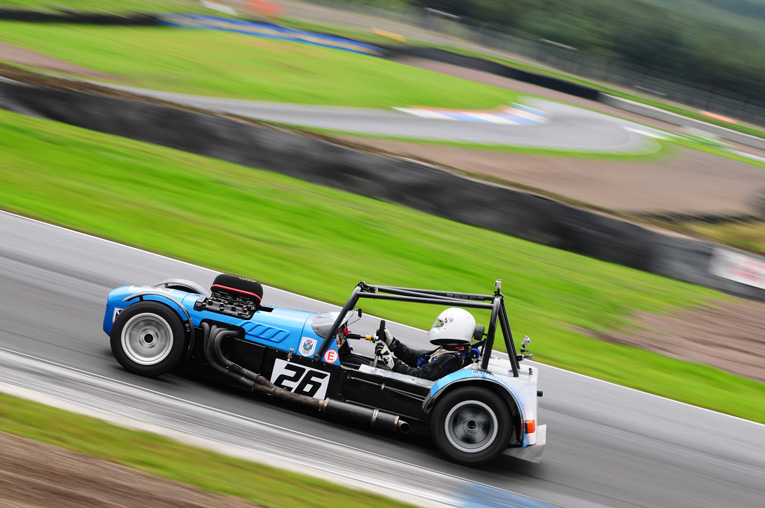 In the Scottish Saloons and Sportscar Championship, three racers headed into this weekend with their eye on the top prize. Paul Brydon, Mark Dawson and Ryan Magennis were all in contention heading into the final race. But a gusty display by Magennis, allied with some bad fortune for Brydon and Dawson, would see him crowned 2013 champion.

Andrew Kirkcaldy had already secured the BMW Compact Cup for 2013. But in the accompanying MX5 series, Paul Curtis had to pull together another couple of race wins before he was announced 2013 champion. Rookie racer and double amputee driver, David Birrell enjoyed a fine debut behind the wheel of Christie Doran’s BMW racer. The former soldier’s results probably didn’t quite reflect his impressive performance; but he will have won a number of fans for the bravery, determination and skill he showed out on track today. 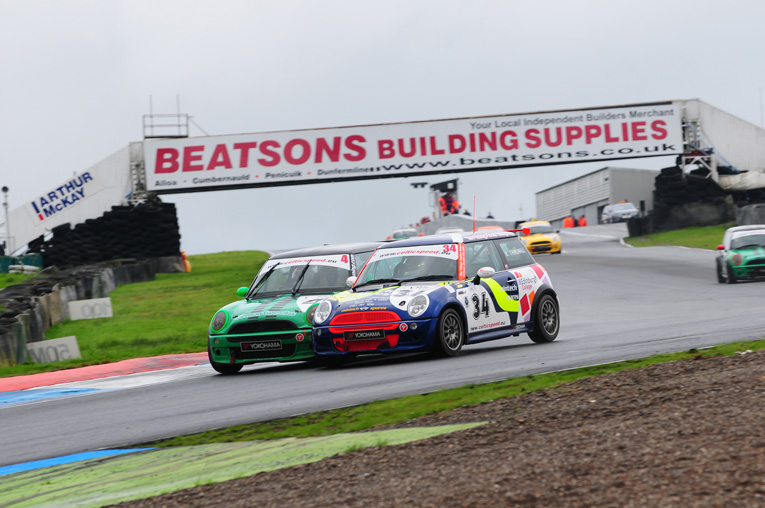 Probably the most hotly contested Championship this year has been the Celtic Speed Mini Cooper Cup. Defending Champion, David Sleigh headed into the weekend knowing that he would need something very special to retain his title from Joe Tanner and Kenny Thirlwall. But his weekend was, pretty much, over before it had even begun; following a costly DNF in the second encounter of the day. That left Tanner and Thirlwall to fight it out for overall glory – and fight it out they did. In a  crazy few moments in the final race of the day. Thirlwall and Tanner clashed heading into SEAT Curve whilst sitting in P1 and P2 respectively, and the next thing anyone knew, Thirlwall was down in P9 and Tanner was hobbling to a 17th place finish with one of his wheels hanging off. For the life of me, l still don’t know what happened in those few moments, the only thing l know for sure, is that Thirlwall is the 2013 Celtic Speed Mini Cooper Cup Champion. And Tanner will be left wondering this evening, where it all went wrong.

The final twist in the SMRC season tale came in the Legends Championship. The weekend had been dominated by the three David’s – David Hunter, David Newall and David Allan. The trio had gotten themselves into championship contention moving into the final outing of the season. David Hunter thought he had secured the 2013 title; before a technical infringement and subsequent disqualification demoted him from the summit if the Legends points table; that honour would pass onto David Newall and it would be him, and not Hunter who would be named Scottish Legends Champion for 2013.

That concludes the 2013 Scottish car racing season at Knockhill. It’s hard to believe the season is over already, let’s hope the winter months pass just as fast and we can get back to watching some great racing at Knockhill once again.