The 2014 season got off to a flying start at Knockhill today (Sunday 6th April) as 131 Scottish Motor Racing Club (SMRC) members took to the circuit for the opening round of the 2014 Scottish Championships. In all, 16 races took to the track in varying conditions and yet, still managed to provide excellent entertainment for all.

The event, named after Alex Bruce also witnessed a fabulous tribute from Alex’s former team, family and friends; as they entered his former machine in the Saloons and Sports Car Championship, driven by 2013 Peoples Ford Fiesta ST Champion, George Orr. Despite some engine trouble which forced the team to miss the opening race, Orr set about the 2nd race of the day like a man on a mission, taking the Evo X from last place on the grid to 2nd position on the opening lap; before finishing the race in 2nd place. However, a disqualification for Graham Davidson, promoted Orr and Bruce’s former charge to a race and class victory, capping an emotional day for the whole team.

Indeed, infringements and penalties were prominent throughout the day as the SMRC organisers set about enforcing the new MSA track limit regulations for 2014. Both Aiden Moffat (Mini) and Ciaran Haggerty (Formula Ford) suffered the consequences of exceeding those limits, by losing out on podium positions, courtesy of the 5 second penalties they received during their respective races. From what we have seen today, it looks likely that warning flags and time penalties might feature at few more race weekends, until everyone adapts to the new rules. 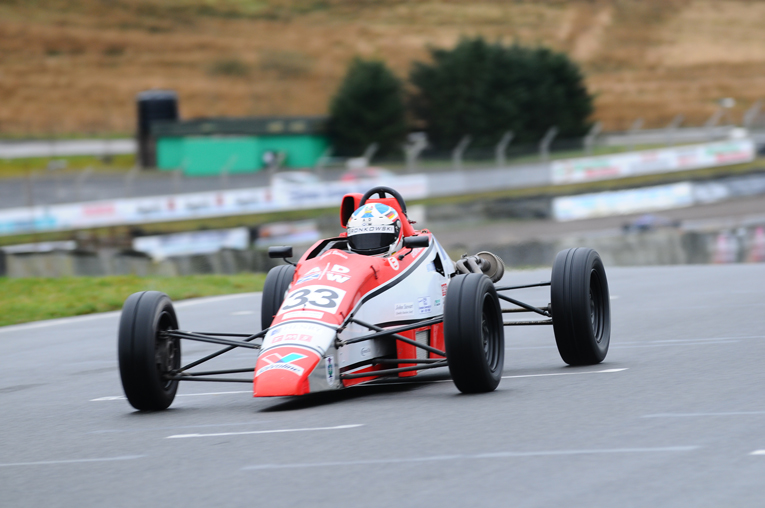 In the Scottish Formula Ford series, Jordan Gronkowski put together two solid race-winning performances to fend off pressure from Haggerty and former Champion, Graham Carroll. Young Adam MacKay and Luke Williams also had strong debut’s this weekend and that bodes well for the rest of the season. 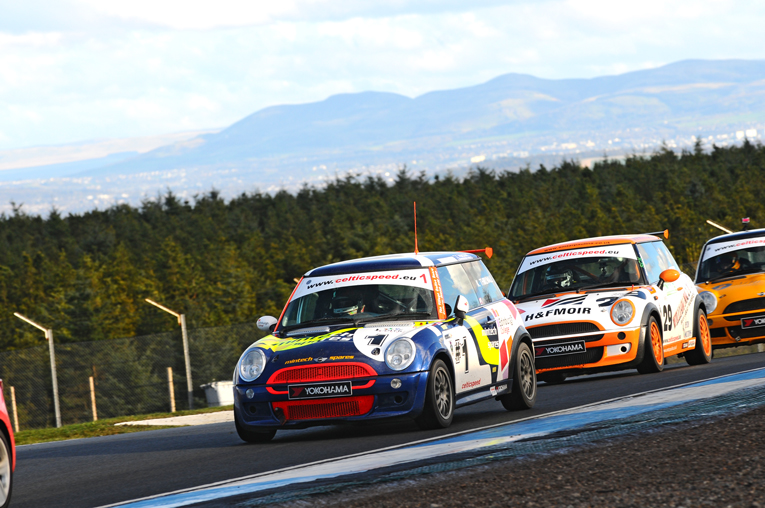 BTCC racer, Aiden Moffat took to the track in the Celtic Speed Mini Cooper Cup Championship, but could only sit and watch as defending Champion, Kenny Thirlwall and Joe Tanner; resumed their rivalry from last season at the head of the pack. Thirlwall, bagging himself three race wins with Tanner taking two 2nd and one 3rd place podium finishes. Oliver Mortimer and Ian Munro shared the other podiums credits, however, it looks highly likely that it will be another superb season-long battle between the Thirlwall and Tanner. Stay tuned to see how this one unfolds as the season progresses. 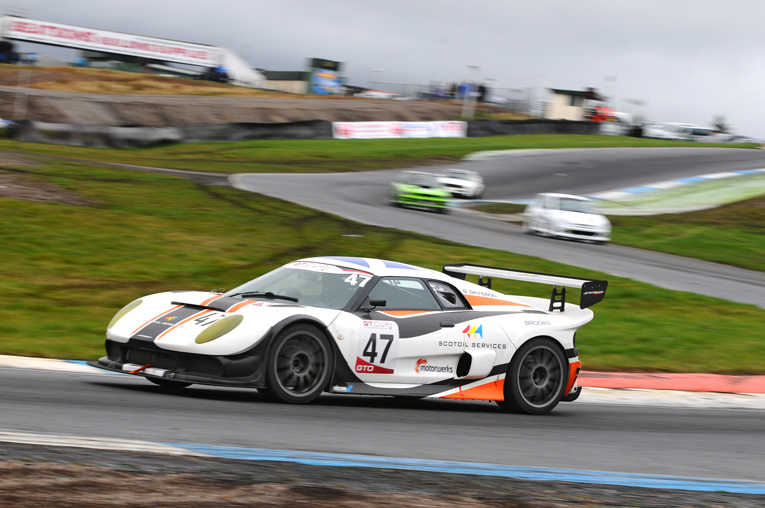 In the Saloons and Sports Car classes, Graham Davidson piloted his Noble M400 to a very impressive opening victory, passing the finishing line some 27 seconds ahead of 2nd placed man Paul Brydon with Alister Roberston in third. As mentioned previously, Donaldson did win the second race, however a DQ for passing under a yellow flag, issued after the race; allowed George Orr to take the win, whilst also promoting Finlay Crocker and Andrew Morrison further up the rostrum.

Alan Kirkcaldy was back to winning ways in a bumper BMW Compact Cup field. Twenty-five cars lined up on the grid this weekend – a remarkable feat considering the Championship was only launched 18 months ago. Kirkcaldy, the 2013 Champion, had to play second fiddle to Steven Dailly in the opening race as the Wallyford driver powered his BMW over the line 5.4 seconds ahead of Kirkcaldy and Souter. Despite taking the second race win ahead of Souter and Russell, Kirkcaldy can be sure that the competition in this class is going from strength to strength.

The Scottish Legends Championship saw some familiar names making all the headlines, with David Hunter, Paul O’Brien, John Paterson, Robbie Burgoyne and Duncan Vincent all sharing the podium slots this weekend. Perhaps another name to add to the list will be that of Daniel MacKay, following a superb victory in the opening race of the weekend. Only time will tell on that front, but you can expect another highly competitive season for the Legends racers this year.

The Classic Sports and Saloons Championship also saw some familiar names on the top step of the podium. Tommy Gilmartin started off the season with an on-the-road race win, as did John Marshall; returning to race after sitting out the 2013 season. Harry Simpson began his season in usual spectacular fashion behind the wheel of his powerful Ginetta securing a 3rd place podium, whilst Raymond Boyd took a 2nd place finish in the final Classic race of the day.

All-in-all, it was another highly competitive day on track for the SMRC classes and we are delighted that the winter is over; and we can get back to enjoying some thrilling motorsport events, at Scotland’s National Motorsport Centre.

See you all for the next SMRC race meeting on Sunday 4th May!