Scottish Championship and Knockhill Motor Sports Club racing made a welcome return to action this weekend (Saturday 26th and Sunday 27th April). In what was a record entry for a KMSC Reverse Circuit meeting, the action on track was equally as record breaking; with class upon class, creating and breaking reverse lap records throughout the weekend.

The frequency and sheer volume of new records was, in part, due to the track alterations which were implemented during the winter break, particularly at the Hairpin; and in part, due to some fantastically close and committed racing; the kind that just seems to bring the best out of those involved.

There were some sterling performances across the board, way-to-many to mention; but we have picked out a few performers in each class that we feel deserve a small mention. 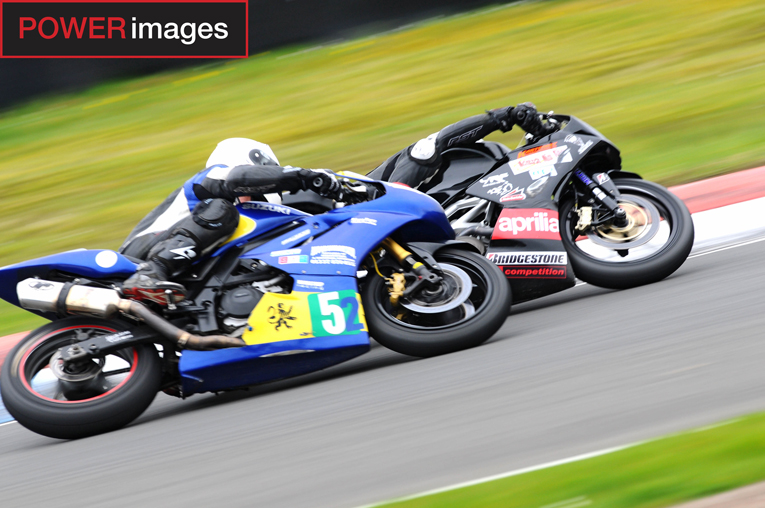 We’ll start with the Scottish Lightweight class, perhaps not everyone’s first choice; but most certainly, one of the most spectacular classes of the weekend. Some may remember the ding-dong battles of Lewis Rollo and Craig Shirlaw from last year; well, that action was amplified to show-stopping levels this weekend with the participation of Bruce Birnie, a multiple Scottish Champion, and up and coming young racer Jason Blacklock. Indeed, one race in particular stands out with all four racers within one second of each other for the entire race; which included lap records for Birnie, Shirlaw and Blacklock, passing moves galore and some close calls, especially for Lewis Rollo. Ultimately, Shirlaw crossed the line to take the win, his second of the weekend; whilst Blacklock (1) and Rollo (2) also sampled race wins during the weekend. As for Birnie, he didn’t quite reach the top step of the podium but his post race comment summed the action up to a tee:

“Now that’s real racing right there. I think l’ll just park the beamer (Superbike) up and have a few more goes on the SV (Mini-Twin).” 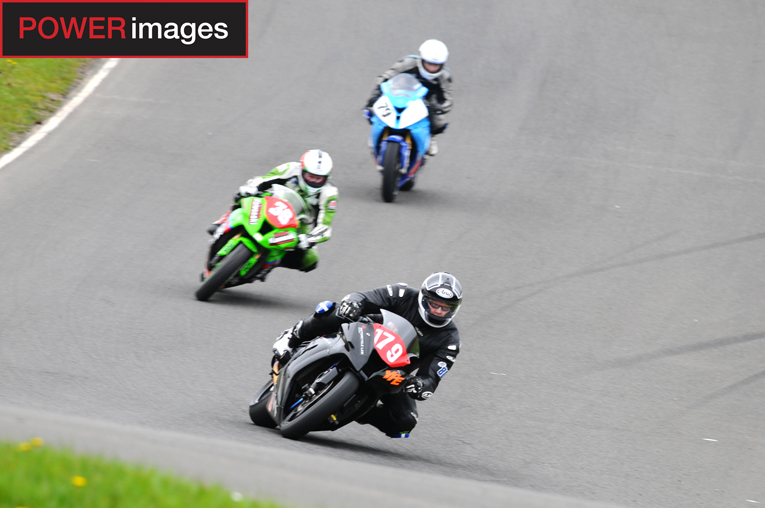 Birnie was once again in the thick of the action in the KMSC and Scottish Championship Superbike races, alongside Andrew Tasker, Donald MacFadyen and Roy Houston. Birnie claimed one victory, but there wasn’t to much he or the others could do to stop Houston claiming four of his very own. This was no mere cakewalk for Houston; he had to scrap and fight for every win, often at exceedingly close quarters with messrs Birnie, Tasker and MacFadyen. Lap records were once again prominent in this class, with Tasker breaking the record first, before MacFadyen and then Houston with a scintillating 51.538 second lap. The KMSC Shirlaw’s Clubman class saw Darren Ross claim three wins ahead of solitary race wins for Forest Dunn and Graham Duncan. 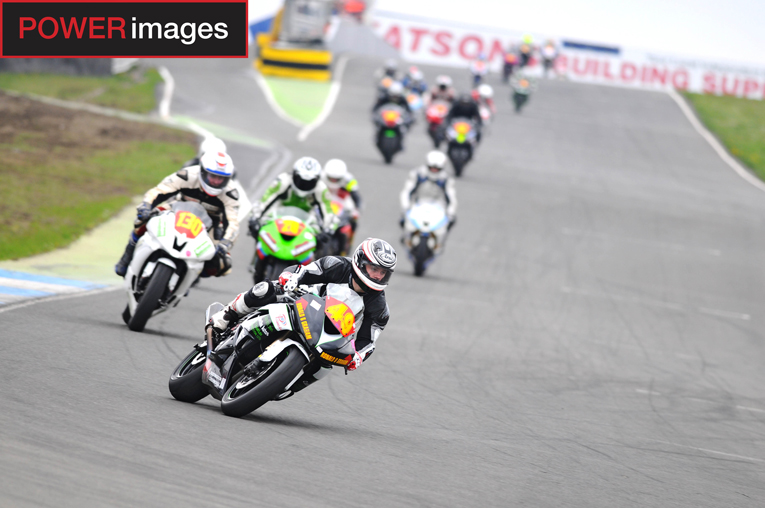 McClung leads the Superstock pack into the Reverse Hairpin

Not many however, could match the pace and consistency of Haddington’s Paul McClung. The Superstock 600 rider claimed a perfect five race wins from five appearances, whilst also breaking his own lap record in four of his five race starts. Indeed, in one case, breaking the record on three separate occasions in a six lap period; ultimately finishing the day with a super-quick 52.597 second lap, for a new Superstock 600 Reverse record. Liam Shellcock (Oban), Douglas Cunningham (Airdrie) and Ian Rumney (Hexham) tried to make a fist of it, and despite sampling multiple podiums this weekend, will probably appreciate some time off to ponder how they are going to reel in McClung at the front. 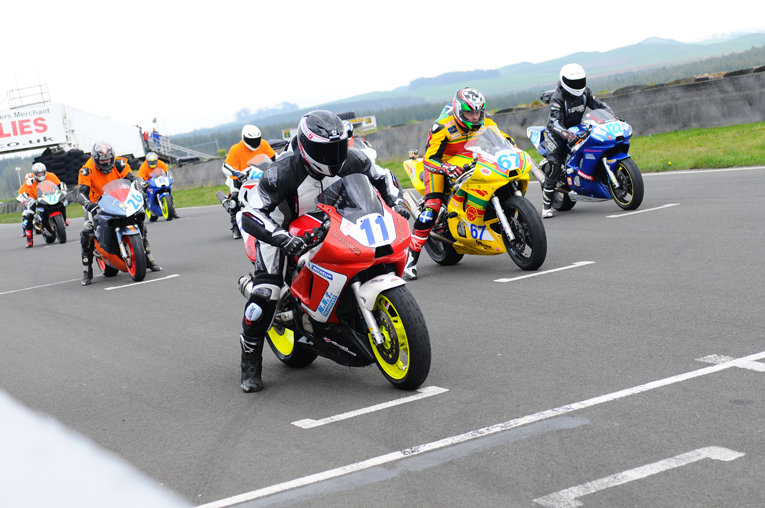 Forman on pole in the Pre-Injection 600 race

Once again, lap records came and went in the Cupar Motorcycles Pre-Injection 600 class with Patrick Forman, Alan McGregor and Des Burns all taking turns to post new times. However, it was Forman who would convert his undoubted pace to race victories this weekend, taking four in total. David Suddes and Shaun Kerrigan were the only riders to finish above Forman all weekend; although Sean Davie, Douglas Brown, Alex Bass, Des Burns, David McCafferty and Alan McGregor will all test Forman’s resolve as the season progresses.

In the KMSC Formula 125 class, Gillian McGaw showed her fellow competitors the road to the chequered flag by taking five race wins from five starts. Across the board though, the youngsters in this class spent the vast majority of their track time improving their lap times, by up to several seconds in some cases. Elsewhere, Grant Reid set about defending his Formula 400 title with 5 straight wins and five fastest laps for a 100% record this weekend.

Newcomers this weekend, also benefited from additional track time courtesy of two novice races – an idea formulated on Friday night between KMSC members and Club officials – and implemented this weekend. In all, fourteen new riders participated with Chris Fraser and Gavin Jones taking the victories; but more importantly, every one of them will have gained some extra experience by having a few more laps under race conditions.

Once again, we’d like to say a big thanks to all the competitors, marshals, sponsors, officials and medics for spending another weekend with us – bike racing at Knockhill. We look forward to welcoming everyone back for the next instalment on 21/22 June for what will probably be, another record breaking and enthralling weekend of motorsport.

You can see all the times and results via Smart Timing or MyLaps. You can also see all the images from Testing on Friday and Sunday’s races via the Power Images website!

You can also see all the Championship Standings via the KMSC website!

See you all next time and thanks again for coming!