The penultimate Scottish Car Race meeting of the season took place at Knockhill today (Sunday 14th September); with valuable championship points up for grabs the action was both action-packed and entertaining. 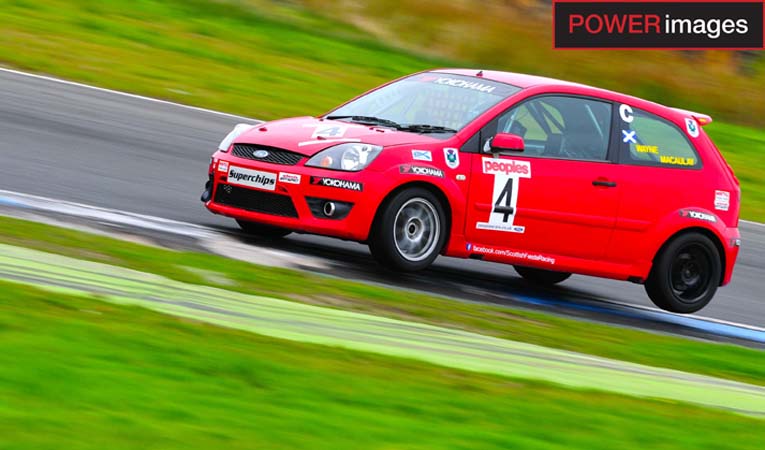 Macaulay was the first to cross the title finishing line after his opening race podium made it mathematically impossible for him to be caught in the remaining races of the season. Despite losing out to the returning George Orr, the 2013 ST Champion, in both races, Macaulay still maintained his 100% podium record at Knockhill for the year. Other podium scorers on the day included Kevin Whyte and Blair Murdoch. In the XR2 Championship, things just got decidedly interesting as Hamish Smart closed the gap to Championship leader, Steven Gray, following his double victory this weekend. Gray did manage one 2nd placed podium in the first race, however, his DNF in the second could prove to be very costly. 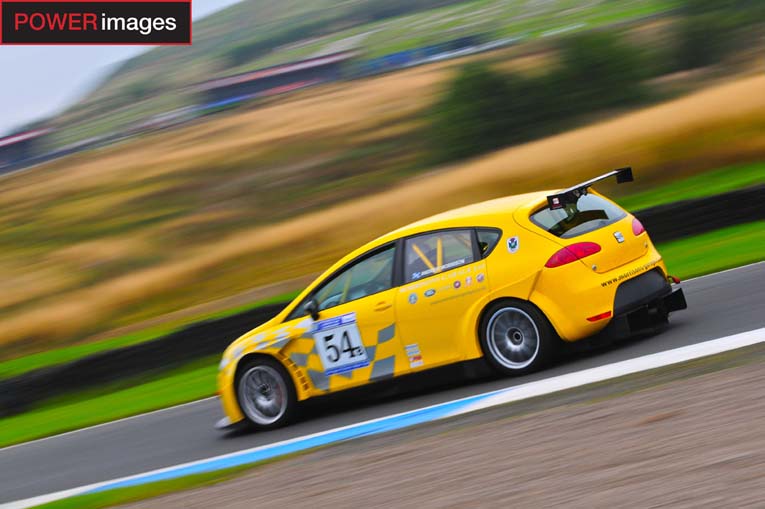 Morrison, claimed his class title win following another consistent points scoring finish this weekend. His double 5th place finishes gave him another two class wins which effectively handed him the Championship, although Morrison was made to work for it after a hard tussle with Mark Dawson in the days second encounter. On the road race wins went to Graham Davidson, ahead of Ian Donaldson and Fiona Kindness, on both occasions. 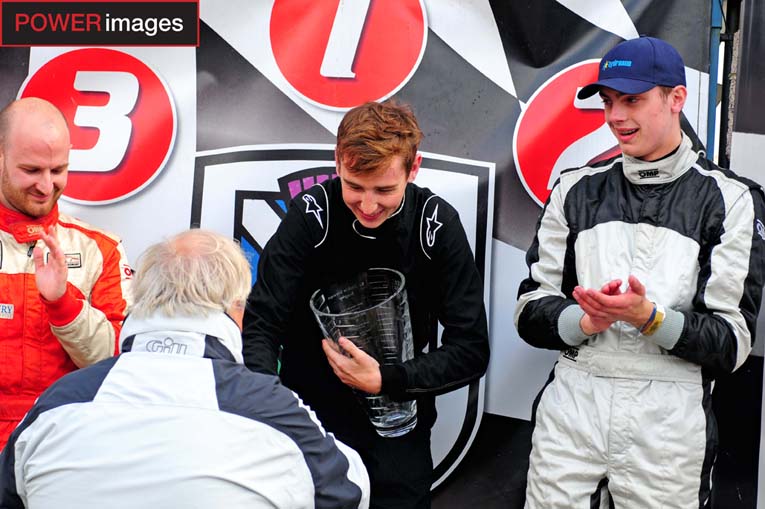 In the Formula Ford series, Johnstone racer, Ciaran Haggerty blazed his way to another three Scottish Formula Ford wins, including a David Leslie Trophy win ahead of Adam MacKay and Jordan Gronkowski. Those results, put Haggerty in a very strong Championship position and also gave Haggerty his 9th successive race win at Knockhill, on the bounce. Gronkowski had followed Haggerty across the line in the opening two encounters, and as the same scenario unfolded in the final race of the day; the 2013 David Leslie Trophy winner made a last ditch attempt to pass Haggerty at the Hairpin. Although there was contact between them, Haggerty held on for the David Leslie Trophy win, whilst Gronkowski managed to recover, following a spin, to claim a third place finish behind Adam MacKay (who also took the Angel Burgueno Trophy). Gronkowski, now has three weeks to develop a strategy to stop Haggerty; it will be a difficult task but at least Gronkowski has shown today – he’s willing to have a go! 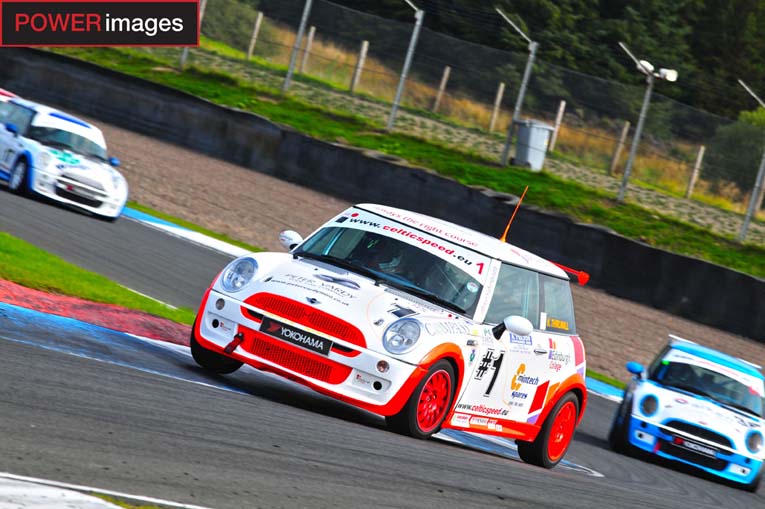 It was all change in the Mini Cooper Cup this weekend with Oliver Mortimer (x2) and David Sleigh taking the race wins ahead of both, Joe Tanner and Kenny Thirlwall. Indeed, Thirlwall had a disastrous start to the day after his first DNF of the season in the opening bout. Tanner failed to capitalise on the opportunity, after he could only finish the race in 15th place, following an off-track excursion at Leslie’s and a jump-start penalty. Tanner did managed to pip Thirlwall in the last race for a third place podium, but with Thirlwall finishing the final race of the day just behind in 4th, that effectively hands the Championship to Thirlwall. That said, with three remaining races left in the season, and nothing to play for except race wins, the final outing of the season, is one race weekend you don’t want to miss!

In the Classic Sports and Saloons Championship, 100% man – Raymond Boyd, finally lost his perfect record for the season, as Stan Bernard powered his Porsche 911 to on the road race victory in the opening race of the day. Boyd reversed proceedings in the second encounter to finish in 2nd place behind Harry Simpson; with Bernard again on the podium in 3rd. Matthew Gordon was the other on the road podium scorer in the day’s first race.

In the Scottish BMW Compact Cup, the winning spoils were shared between Alan Kirkadly and Steven Dailly; Kirkcaldy taking race one victory and Dailly the second of the day. Kirkadly still remains top of the Championship and looks odds on to secure his second BMW Compact Cup in successive seasons. Carol Brown had a good weekend as she helped herself to two third place finishes, and more importantly, put herself in the running for an overall third spot in the championship. 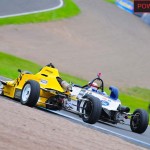 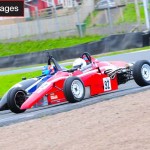 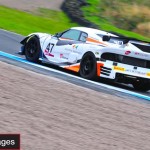 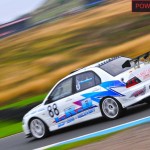 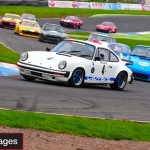 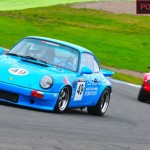 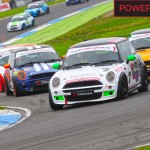 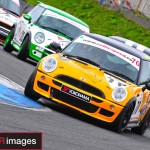 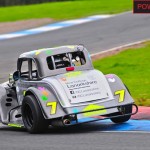 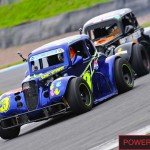 Finally in the Legends Championship, current Championship leader Paul O’Brien had another strong weekend, claiming a race win and a 3rd place podium. However, with his title rivals also scoring consistently well this weekend – John Paterson (2nd & 2 x 3rd), David Hunter (1st, 2nd & 3rd)), and Duncan Vincent (1st & 2 x 4th; plus a new Lap Record of 59.086 secs) – this is one Championship title that will likely go to the final race of the season.

Join us for the final meeting of the year, in three weeks time, on Sunday 5th October as all the remaining 2014 Championship winners are decided.

Check MyLaps or Smart Timing for all of today’s results and make sure you log onto the Power-Images website for a full photographic run-down of this weekend’s action over the coming days.

Book Ticket for the FINAL ROUND!!