The McRae Rally Challenge, backed by Beatson’s Building Supplies, at Knockhill Racing Circuit on May 16/17 is shaping up to be one of the biggest rally themed events ever staged in Scotland, if not the UK.

Originally designed to be a celebration of Colin McRae’s World Rally Championship title win 20 years ago, the idea has gained momentum over recent months with rally fans and motoring enthusiasts the length and breadth of the UK getting excited by the prospect. 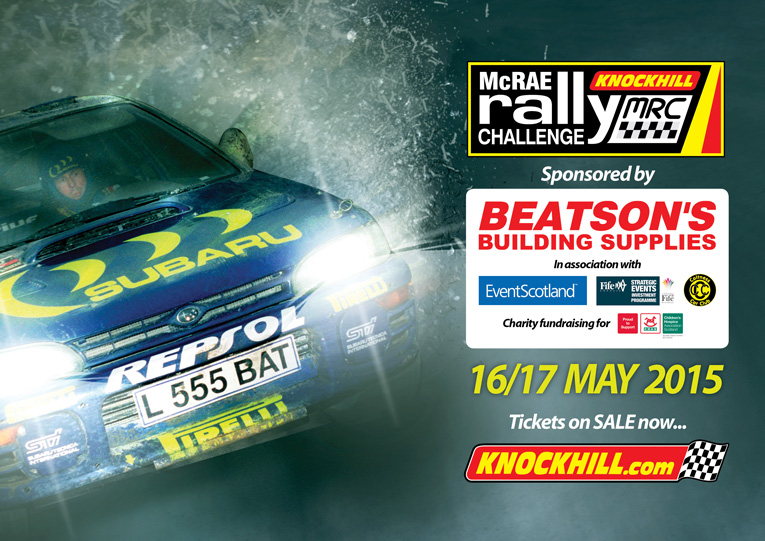 One star feature will be the largest gathering of Colin’s competition cars ever seen in Scotland. From his original autotesting Mini and Talbot Sunbeam first rally car, to the Subaru Impreza which carried him and Derek Ringer to Britain’s first outright World Rally Championship title victory in 1995. And there will be a few surprises amongst this line-up!

Over the years enthusiasts have snapped up ex-McRae competition cars as mementoes of their hero, many of them locked away from public view, until now.

“Since we went public on this event we have been approached by a number of these fans to supply ex-McRae cars for the gathering,” said Stuart Gray, Knockhill’s Events Director, “and support from the general public has been amazing too. The idea of a 20th anniversary commemorative event just seems to have struck a chord with the fans. But it has also given us the opportunity to create a major event for Scotland, all based around content and action with something for all the family.”

Jim McRae added: “The fans’ desire to celebrate Colin’s achievements is overwhelming at times. I was driving two ‘historic’ rally cars at the Race Retro event two weeks ago, and the public reception was marvellous. I also managed to have a word with some rallying greats about making an appearance in Scotland – and I’m still working on that.”

One star name which is already committed to the event is Alister McRae, Colin’s younger brother and former British Rally Champion and FIA Asia-Pacific Rally Champion, who now lives in Australia.

“There’s no way I’m going to miss this,” said Alister, “I’ll be coming ‘home’ for that weekend. I have no idea what I’ll be driving when I get there, but whatever it is, it will be fun that’s for sure. ”

Indeed, the central event in the two day spectacular is a competitive Special Stage Rally. There will be three classes for rally cars of the past, the present and the future with uniquely, a special section for ‘Juniors’. This latter category is for 14-17 year olds who compete in rallying in 1 litre cars. Introduced two years ago, this special class for youngsters is already producing stars of the future.

The full programme of events, displays, parades, demonstrations and star guest line-up will be announced over the coming weeks, but the message now is to rally and motoring fans – keep the 16/17 May clear. It will be a memorable motoring must.

Tickets can be pre-bought at a discounted rate on-line via the Knockhill website or by calling 01383 723337 – advanced booking discounts for all pre-booked tickets: