Whilst Taz continued his progress up the National Superstock 600 order, moving into third place in the overall standings following an impressive display at the last round that included another National podium and a new Snetterton Stock600 lap record.

“That’s the closest I’ve come to winning in the Superstock 600 class, so I was happy with the way l rode and it was great to get a new lap record. I’ve also moved up to third in the championship so it was a satisfying weekend overall. I’ll be doing everything I can to find a way to win at the next round at Knockhill.

“If I can repeat what I did here last year with a front row start and a podium then I’d be very happy,” said Taz. 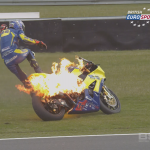 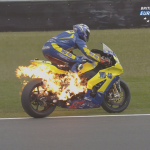 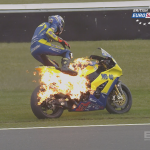 Whilst for Taylor, who now rides for Team WD40 Kawasaki in the premier British Superbike class, he had to be content with sending social media into meltdown following his escapades at Snetterton; after his bike burst spectacularly into flames with him still aboard. Luckily, Taylor managed to dismount before any serious damage occurred; the same however couldn’t be said about his bike.

“I’ve had better weekends, but that’s racing, so I have to pick myself up and come out fighting at the next round. The WD40 Team are fantastic and were as devastated as I was when things went wrong. I’ve never had a bike go up in a ball of flames under me before so that was a new experience, but not one I want to repeat in the near future!

“It is onwards and upwards from here, so I’m really looking forward to the next round at Knockhill – one of my favourite circuits on the BSB calendar,” concluded Taylor.

And for Dad, Niall, who takes a keen interest in both boys’ careers; including accompanying Taz on a recent visit to Knockhill for some testing. 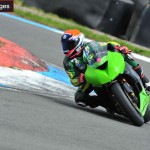 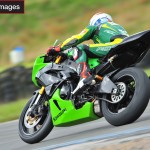 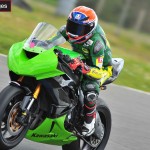 “Looking ahead to Knockhill, Taz had 2 or 3 really good race runs on his practice bike there. It will help him get up to speed with the track again, so when he goes out of the pit lane for his first free practice he’s on the case – as Knockhill is a technical track – so it’s good to get some feedback for the races ahead of the weekend.

“Taylor is learning all the time on the ‘big’ bike. Talk to any Superbike rider and they’ll tell you the bikes are a handful, they’re 220bhp these days  – 200mph bikes and they hit you in the face at every corner; Knockhill is very tight, technical and twisty, but the good thing about the BSB Championship is that there is lots of practice time. Taylor knows the track well and we’ve got some good ideas for bike set up, so he’ll but up to speed in no time,” said Niall.

You can catch both boys over the weekend of 3/4/5 July when Britain’s premier motorcycle racing series comes back to Fife for three-days of super-fast, super-slick bike racing action.

Tickets for the event can be purchased via the Knockhill website (Knockhill.com) or by calling the office on 01383 723337. Alternatively, tickets will also be available at the gate over the course of the weekend.