This weekend (Sunday 8th May), Knockhill hosted the 6th running of the Scottish Ford Live event in association with the Central & East and North east RS Owners’ Clubs; and welcomed a record breaking turn out on and off track. 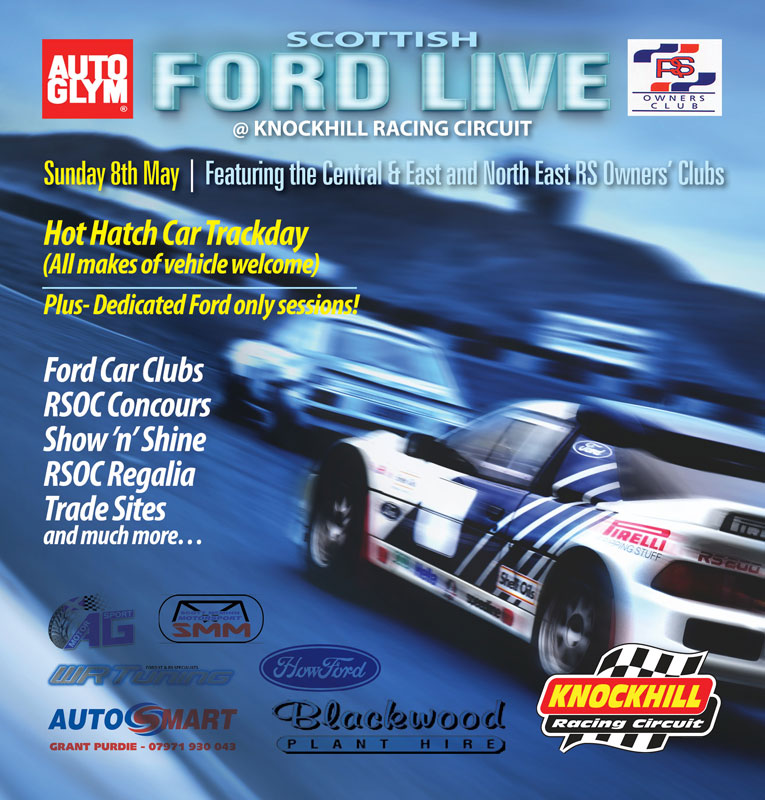 350 enthusiastic Ford Owners’ from North and South of the border converged on Knockhill to celebrate all things Ford, arriving in almost every conceivable make and model of the iconic Ford brand you could imagine; from historical beauties such as the RS200 through to the cutting-edge WRC M-Sport Fiesta R5, and everything in between.

As well as the remarkable turn out in the paddocks, we saw record-breaking interest on track with all 150 slots of our Hot Hatch Trackday sold out ahead of the event. We also witnessed jam-packed Ford-Only sessions which saw today’s modern equivalents go head-to-head on track against their predecessors – a tremendous sight for all Ford fans.

Additionally, in the paddocks fans where treated to a number of iconic show cars on display including a number of ex-WRC rally cars – with the M-Sport WRC Fiesta R5 topping the bill. Colin McRae’s MKII Escort took centre stage alongside a similarly liveried truck, and Tom Blackwood was kind enough to bring along a plethora of iconic cars including a Carlos Sainz Focus, RS200 and the famous Eddie Stobart liveried Escort.

All-in-all, a terrific day of entertainment for Ford fans, made all the better by the blistering Knockhill sunshine. We very much look forward to 2017 and hope you can all make it.

Finally, a huge thanks to Ron Walker and everyone else who took the time to come and helped organise such a successful event.