Shane Byrne sealed his 60th career win onboard his Be Wiser Ducati Racing Team Panigale R this afternoon at a wet Knockhill; but it wasn’t exactly plain sailing for the 4-time Championship winner. 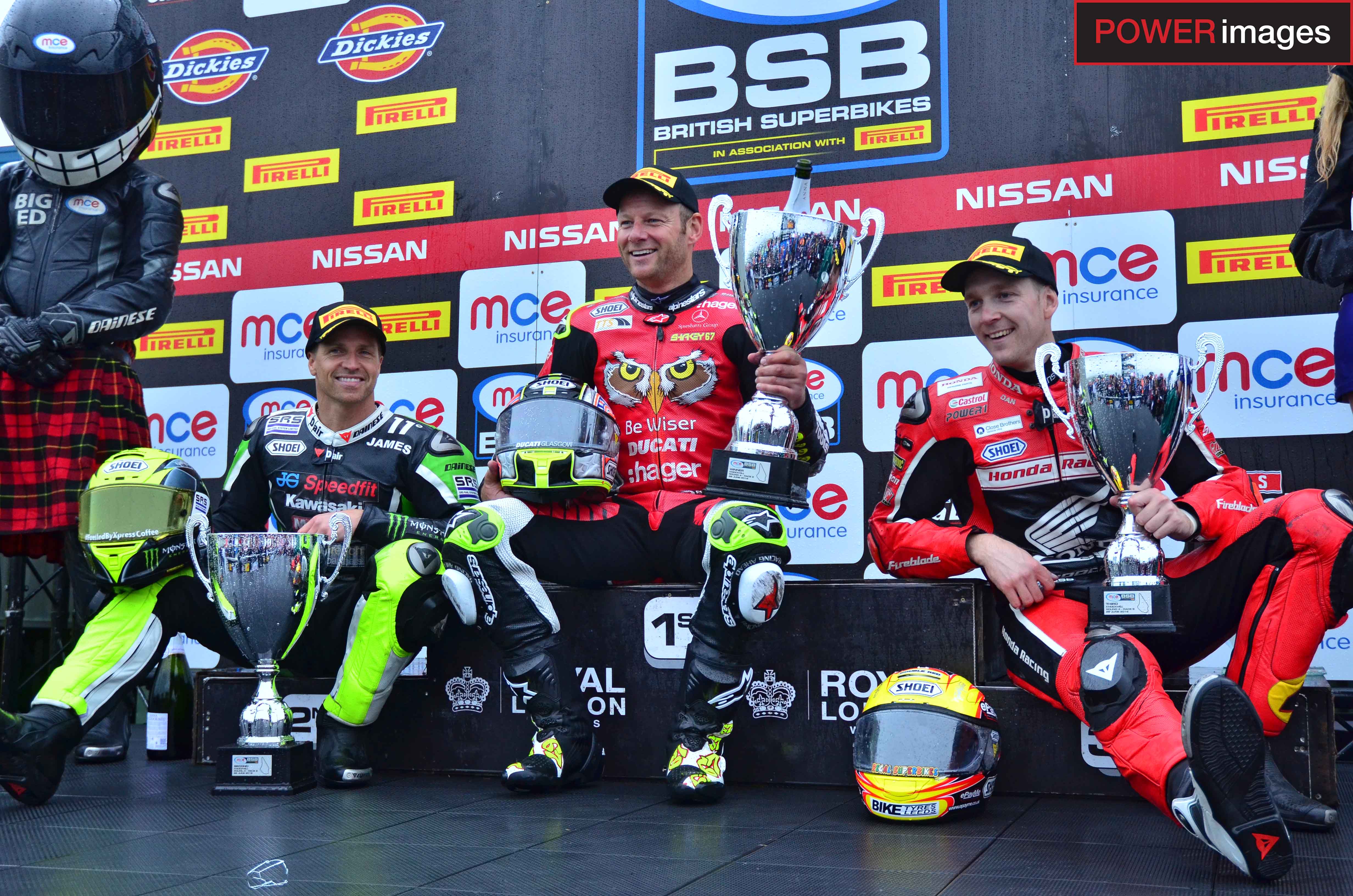 Byrne, starting the race from 11th place on the grid after crashing out in race one, battled his way up to front of the pack and by 11 laps had taken lead of a frenetic race – a race that had already seen a number of riders lead including Peter Hickman and Dan Linfoot.

On lap 12, Leon Haslam and Byrne touched wheels as Haslam closed the gap to just 0.101secs and that wouldn’t be the only near-miss the duo would have as they raced at close quarters. Haslam obviously felt confident after his performance in yesterday’s wet session and duly pushed ahead of Byrne on lap 13 to take the lead at the Hairpin. 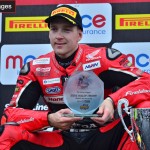 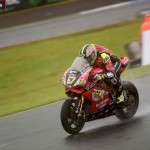 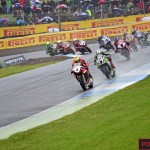 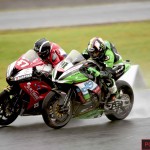 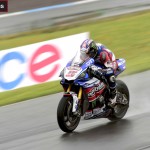 Haslam and then Byrne swapped positions for a few laps as the contest headed to a dramatic conclusion; but on lap 24 Linfoot made an audacious move to the front taking both Byrne and Haslam on the same lap. Ellison then began to close in on Haslam and duly posted the fastest lap of the race with a 52.482sec effort. Linfoot despite his best efforts lost the lead to Byrne by running wide on lap 27 and Byrne then took full advantage to open our a 1.2 second lead on his nearest rivals. Byrne then negotiated the trailing back markers to eventually cross the line 1.8 second ahead of the field.

There was however, more drama to come as Haslam dropped down the order promoting his JG Speedfit Kawasaki stable-mate James Ellison to third. As the remaining riders raced into the Hairpin, Linfoot had a moment on the exit and did well to stay aboard his Honda Racing Fireblade – that though gave Ellison and opportunity to slide up the inside and pinch the 2nd spot on the podium, much to Linfoot’s dismay. The Honda Racing rider did managed to hold on for the 3rd place spot and his second podium of the weekend. Linfoot also received the Steve Hislop ‘Flying Haggis’ Award for the fastest racing lap of the weekend with a 48.458 second effort.

Here’s all the reaction from the riders: 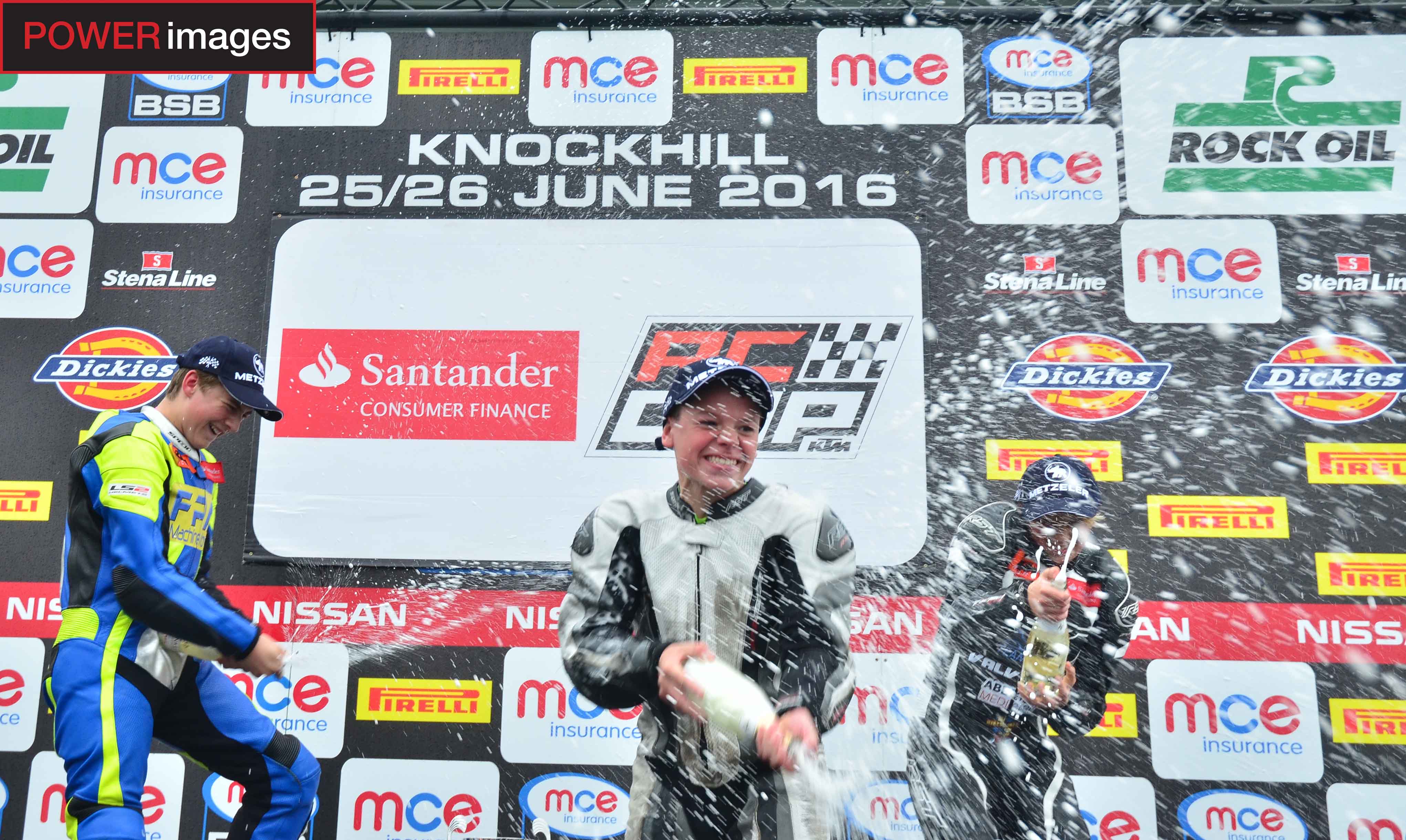 Despite the weather at the end of the day, the weekend turned out well for some of the Scottish contingent. Young Lewis Paterson set the ball rolling on Saturday with a number of impressive displays aboard his KTM in the Santander Consumer Finance British Junior Cup taking a third, two seconds and a win to round out the action on track today. 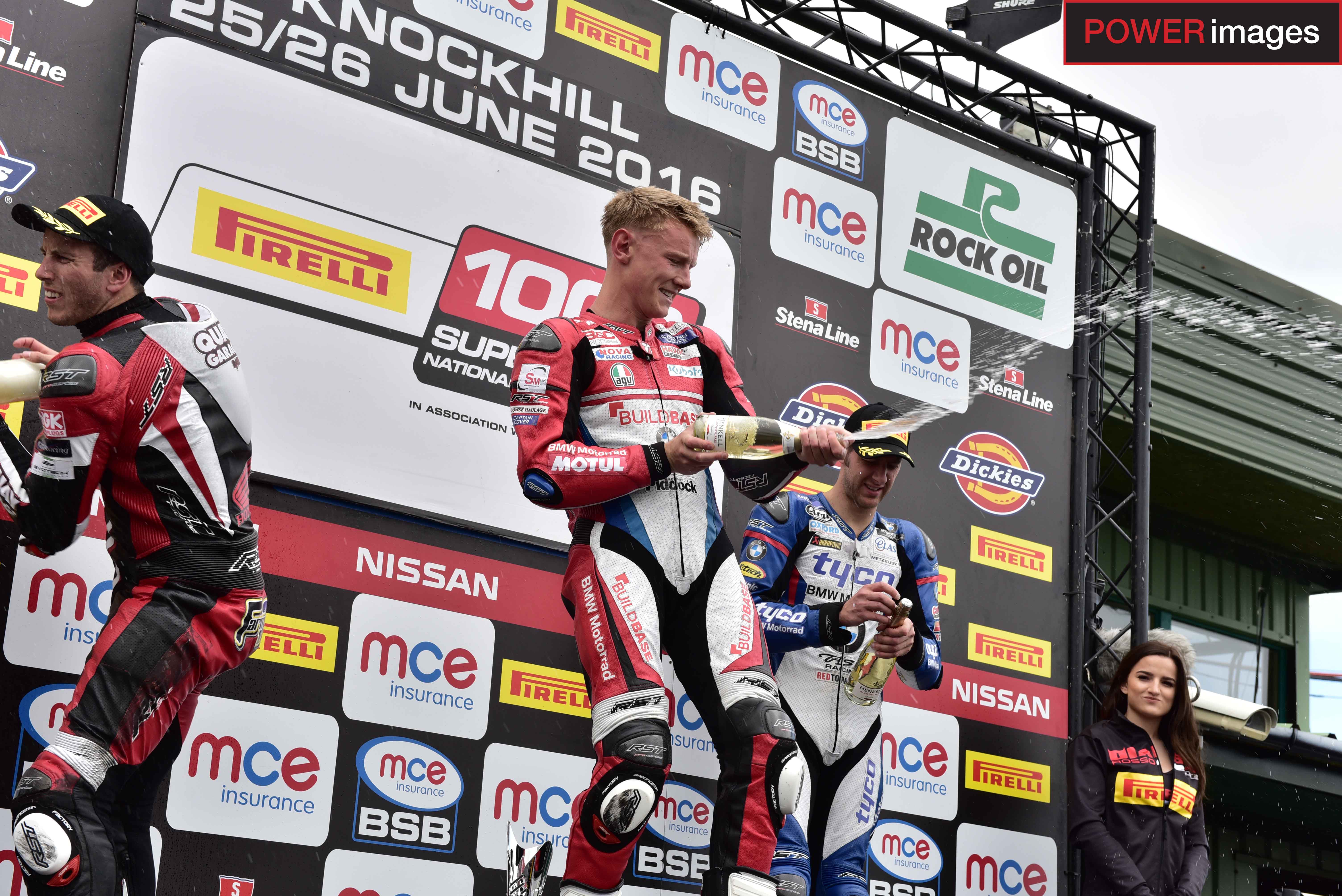 Taylor Mackenzie, blitzed way to the top step of the Pirelli National Superstock 1000 series to deliver a welcome home podium for the Mackenzie Clan and all the Scottish fans – however following a protest, Mackenzie was demoted to 4th overall for passing under a waived yellow flag; but the young man can be very proud of a dominant display despite the weight of expectation at his ‘Home Round’.

“You know, I’m obviously disappointed in the result, as far as I concerned I past the finish line first and I guess that’s all that matters really. It’s still been a strong weekend for us and we move on from Knockhill and go again.” 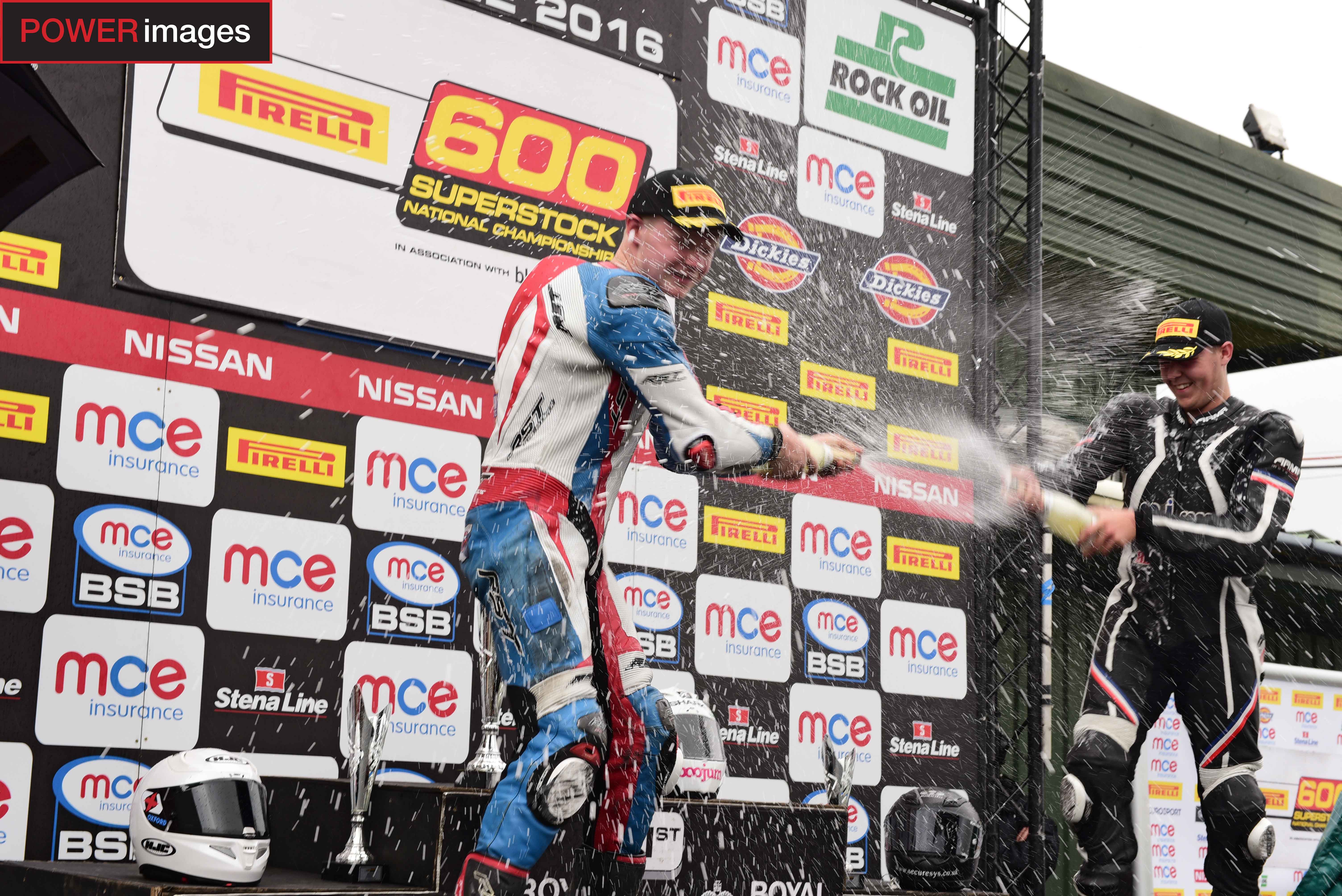 Lewis Rollo also fell foul of the waived yellow but in the opposite order. He finished his race in second position but felt that he had been passed under the yellow flag on his arrival into parc ferme, after the Superstock 600 race was cut short for a red flag incident. As it stands, that result remains for the moment; but Lewis was over the moon with a home podium:

“I’ve got to be happy getting on the podium at Knockhill. I thought I had won that one, but I’ll leave that to the BSB officials to sort out and I’ll just enjoy the podium at my home track.” 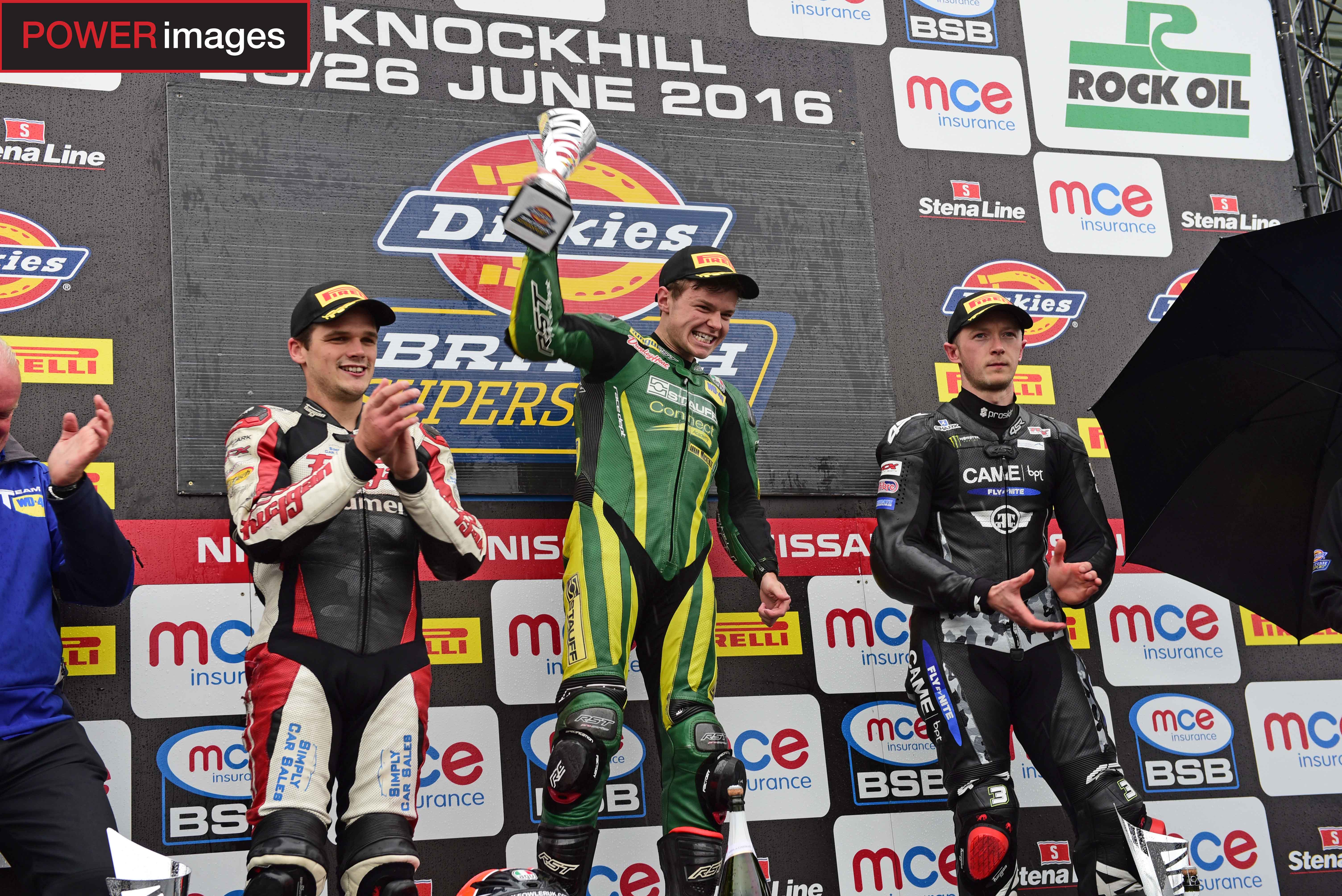 Tarren Mackenzie on the other hand. Well, what can you say about his weekend? A slipping clutch virtually derailed his efforts on Saturday, resulting in a P33 grid slot for the Dickies British Supersport sprint race on Saturday. 18 laps later and 25 places gained, resulting in a P8 finish from the back of the grid – with a lap time worthy of a P5 grid slot for the extended feature race on Sunday – and it was game on again. A lightening start from the off and Mackenzie never looked back to cross the line comfortably ahead of Luke Jones and James Westmoreland.

“I obviously wanted that win. I have a lot of friends and family here today, and it is my home round. The plan was to settle into the race and take it form there. But the gap appeared and I went for it. It’s a special day. A bit gutting for Taylor and it would have been nice to do a proper Mackenzie double, but we’ll be back next year.” 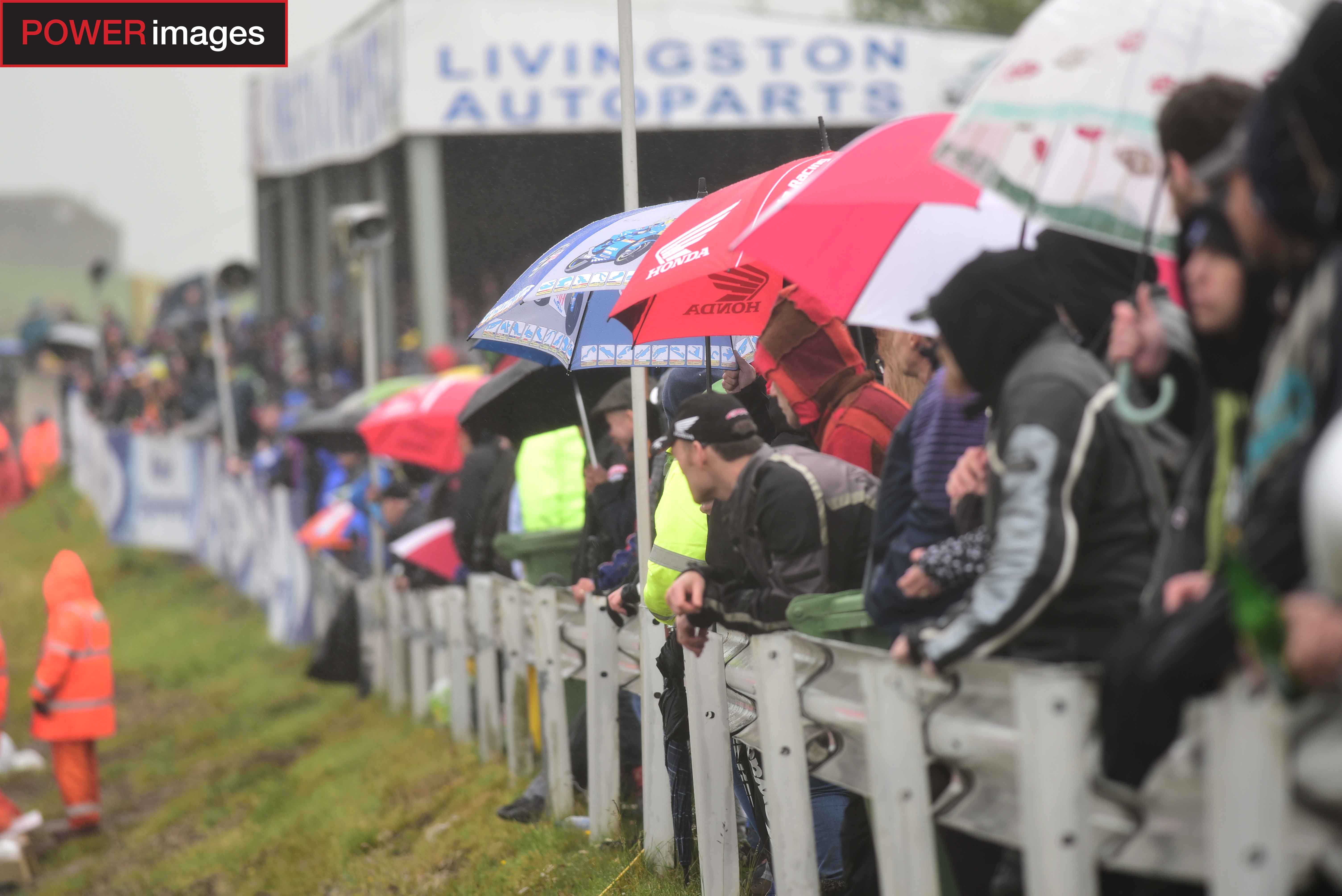 Finally, thanks again to all the fans for turning out, and staying behind when the weather turned a bit sour. As Shane Byrne said in his interview you guys always turn out whatever the weather and we appreciate that.

Thanks again to all the people behind the scenes, Medics, Marshals, Officials, Teams and Competitors; please have a safe journey home!