Leon Haslam scored his third victory of the MCE Insurance British Superbike Championship season at Knockhill after an intense fight for the win with Honda Racing’s Dan Linfoot.

As the race got underway Jason O’Halloran hit the front of the pack from Haslam and John Hopkins, with the ‘Pocket Rocket’ hitting the lead with a decisive move at the Hairpin on the third lap. As the pair diced for the lead, Shane ‘Shakey’ Byrne was pushing to move up the order, but crashed out on the fourth lap at the Hairpin, collecting Briggs Equipment BMW’s Jake Dixon. 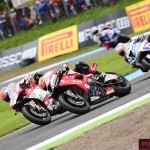 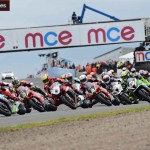 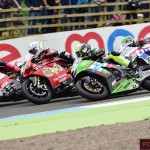 The incident bought out the Nissan GT-R Safety Car and the pack formed up with Haslam leading Hopkins, Linfoot and Michael Laverty with O’Halloran pushed back to fifth. By lap eleven Hopkins was threatening at the front; taking the lead for the ePayMe Yamaha team, but as they streamed down to the Hairpin, Haslam made a move to regain the lead.