This weekend sees the final rounds for the KMSC Motorcycle Racing Championships conclude at Knockhill – Saturday 3rd and Sunday 4th September. The Scottish equivalent Championships have one round remaining following Knockhill at East Fortune on 17th & 18th September. 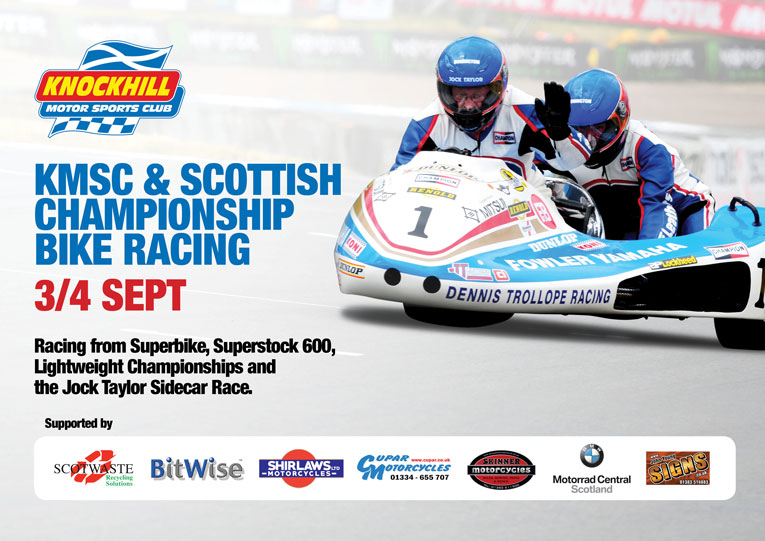 However, with valuable Scottish Championship points and KMSC titles up for grabs, expect to see a frantic weekend of racing as riders push those limits in order to be crowned the 2016 KMSC Champion.

Our regular six Championship classes will compete throughout the two-day 37-race programme – with each class racing several times each day. However, this time around the KMSC Sidecars will also be on track vying for the coveted Jock Taylor Memorial Sidecar Trophy and Steve Webster Trophy – awarded during the final sidecar race of the weekend to the race-winning and fastest-lap scoring sidecar duo respectively. What makes the trophies even more special, is that members of Jock’s family will be here to present the awards after the race.

“Knockhill played a big part in my early racing years, and it was Jock Taylor who was my reason for getting into sidecar road racing. I never raced against him, and never met him to talk too; but I have the utmost respect for what he archived with the bikes he had at that time. I would of so loved to have had the opportunity to race with him. Here we are some 30 + years on, and he’s still one of my heroes,” commented 10-time World Sidecar Champion, Steve Webster.

Niall Mackenize, KMSC Club President, has also sampled some sidecar action in his time; and he too has the utmost respect for Jock and his fellow sidecar competitors. We caught up with him recently and you can watch the full interview below.

With some of the main classes racing up to five times over the weekend – riders in each category can conceivably bag themselves a grand total of 105 points from the meeting; of which could prove pivotal for those looking to overhaul the current championship leaders.

Make sure are here for what will be a thrilling and dramatic end to the KMSC bike racing season this weekend at Knockhill. Tickets are available online now – subject to advanced booking discounts – or can be bought at the gate on the day you attend.

And here’s a link to pre-book those tickets.