Scottish Ford Live sponsored by Elite Automotive, now in it’s seventh year, continues to attract Ford owners and fans from every corner of the UK. Indeed, the Hot Hatch Trackday and Ford Live event now ranks as the third biggest Ford gathering to take place in the UK; and, on today’s showing we can see why. 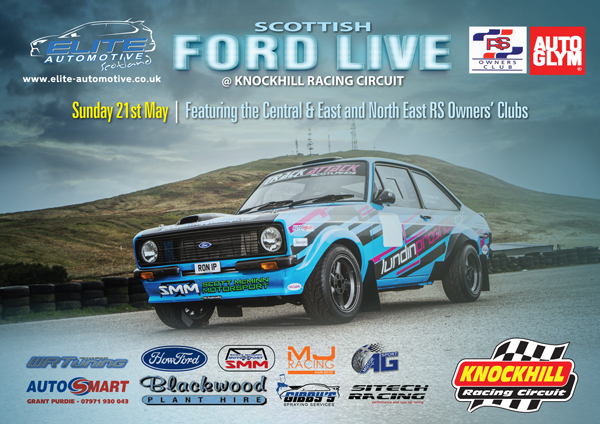 Top RS clubs from up and down the country assembled, or should we say, packed into Knockhill today Sunday 21st May. With RSOC enthusiasts from North Yorkshire, Northumberland, Tyne & Wear, Durham/Derbyshire, West of Scotland and of course the Central & East, and North East RS Owners’ Clubs who help organise the event; alongside countless others… to many to name in fact.

Aside from that, there were a vast array of Fords from varying eras on show; all sat side by side in the paddock alongside some of the more iconic Fords; which included Jimmy McRae’s Sierra Cosworth that he, Alister and Colin drove to British Championship success. We also saw for the first time at Knockhil at Ford GT, an RS200 and a number of ex-WRC Fords. Speaking of Rallying, M-Sport were on hand with their WRC Fiesta, along with their own trade stand. Other trade stands included Autosmart, AET Turbos, Neilson Polish and the Junior 1000 series were also on hand promoting the junior Rally Championship to kids aged 14-17 years. Basically, there were trucks, Transits, Fiestas, Focuses, Escorts, Cosworths, Mustangs and everything in between.

Tom from Elite Automotive, sponsors of the 2017 event commented:

“Absolutely brilliant, the level cars and the amount of money that has been spent on these machines is just unbelievable. Elite Automotive set up a year and a half ago. Our passion is Ford, and each one of my business partners has owned or been involved with the Ford brand going back 20 odd years. So, our ethos is simple, we hand pick the best Hot Hatches, prepare them to the highest possible standard and sell them on to people you see here today. My personal favourite has to be the Escort Cosworth, and I’ve been lucky to have owned a couple in the past… but I have to say I’m extremely jealous of some of the models we have on show today.”

Additionally, there were a few other things to entertain the masses. Paul Swift astounded the audience with his parallel parking, j-turn and 2-wheeled driving skills on the main track, in amongst a full day of Hot Hatch Track sessions that included two groups of Ford only cars. There were demonstration runs of the RS200, Redstone BTCC Focus and a track invasion at the end of the night for remaining Fords on site – always a good way to end an event like today.

Congratulations to Ron Walker and his team for helping to pull off another successful Scottish Ford Live; and to all those individual owners, who buffed and polished their vehicles, despite the rain, so that we could all enjoy the sight of gleaming Ford machinery up and down the paddock.

We thank, each and every one of you for coming today and hope to see you back at Knockhill for the eighth installment of Scottish Ford Live next year.