With battle set to resume at Knockhill in under three weeks’ time, which hosts round four of the 2017 MCE British Superbike Championship over the weekend of June 16/18, interest has been increasing in the inaugural Anglo Scottish Pro-Am Challenge which is set to take place that weekend. 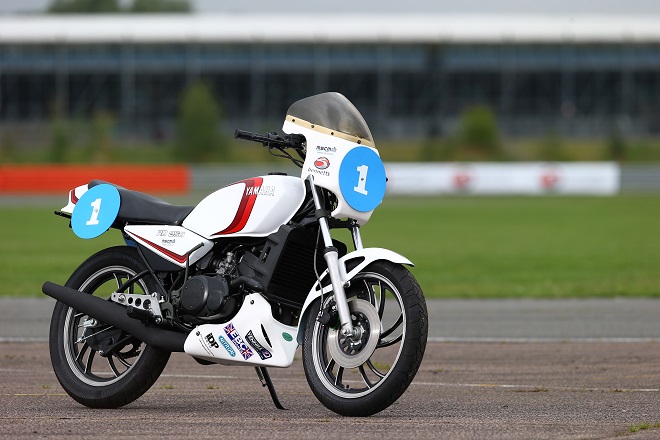 Fresh from a strong Scottish team being announced last week, which will be headed by player-manager Niall Mackenzie, the English team manager Chris Herring has revealed his provisional squad to do battle around the Fife track on identical Yamaha RD250LCs.

1983 French 250cc Grand Prix winner Alan Carter heads the marauders from south of the border and after making a comeback at the Pro-Am event at last year’s British Grand Prix, is set to go head to head with arch-rival Mackenzie.

The pair were stars of the original Yamaha RD Pro-Am Championship back in the 1980s, whereby races were beamed into living rooms all around the country making household names of many of the stars of the show all aboard standard Yamaha RD350LCs which pitched seasoned professionals against raw rookies.

Joining Yorkshire ace Carter in the English team is runner-up in the 1984 250cc British Championship Geoff Fowler as well as Charlie Corner who won the 1981 350cc Marlboro Clubman’s Championship. Geordie Dale Robinson was a leading light in the MCN Superstock Championship whilst 1982 Marlboro Clubman’s champion Curt Langan is another Englishman expected to feature well.

Marlboro production racing legend Andy Muggleton and 1980s 250cc British Championship front-runner Graeme Mitchell are also in the line-up with the eighth and final English rider still to be announced, whereby Herring is keeping the identity of the well-known rider a secret for now.

Stuart Gray, Knockhill Director of Events said: “Now that both teams have been revealed, we are even more thrilled and excited to be hosting the Yamaha RD250LC Anglo Scottish Challenge. The line-up of riders in both teams is simply legendary and to see many of these riders come out of retirement to take part really does show the level of interest from both sport and the fans. It’s going to be a fantastic addition to the thrilling spectacle provided by the MCE British Superbike Championship and the support races which is a must-see this year.”

Tickets for the event can be booked online now via the Knockhill website, tickets will also be available at the venue throughout the weekend.