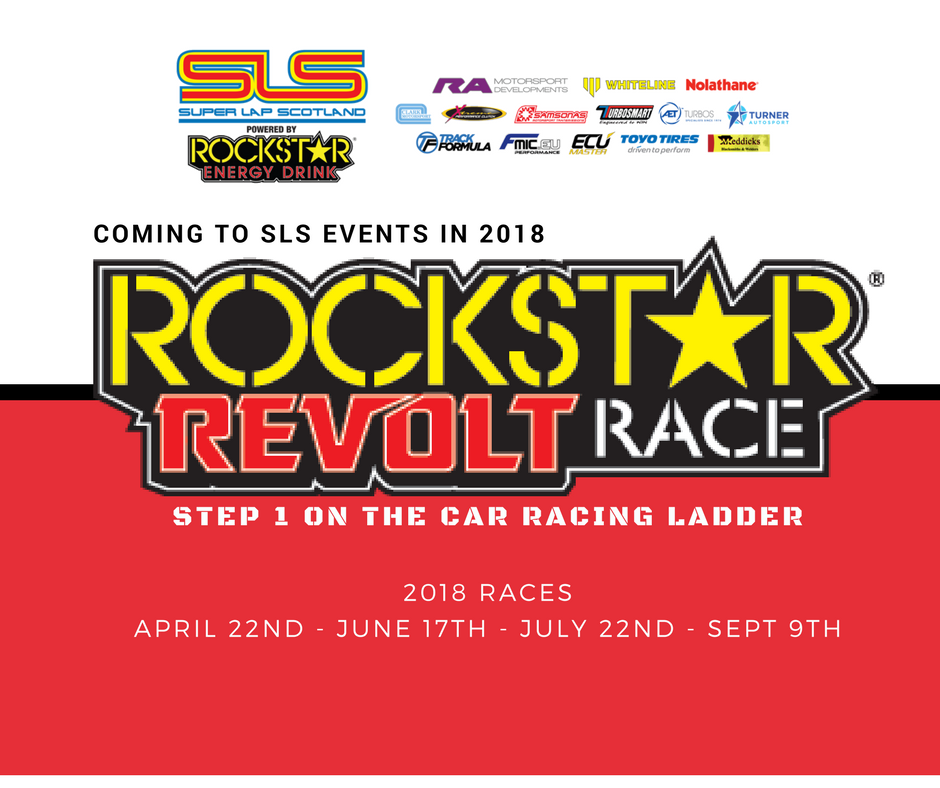 Open to Super Lap Scotland competitors, the Revolt Race Series aims to provide drivers with a racing opportunity that coincides with the Super Lap Scotland Championship calendar (Sundays only). Our goal is to provide competitors with the chance to take their next step on the motorsport ladder while competing within the same class structure as SLS and against drivers they have grown to trust.

Class Structure
The classes run parallel with SLS, with the 7 different power to weight classes being carried over to the Revolt Race.

Race
One race of ten laps will take place after the Super Lap Scotland Final with competitors racing for class honours. The races will commence with a Rolling Start and the first goal is to cross the chequered flag ahead of your class rivals. Secondly, it is to win the Rockstar Revolt Race Trophy after class handicaps have been applied.

The Revolt Race Handicap
Our lap time handicap system will be applied to the race results after the race has finished, levelling the playing field across the classes. We have calculated the Handicap system based upon historical class lap times in previous SLS events (2017 onwards). The driver that is closest to or the furthest ahead of their class handicap time will win the overall race and be awarded the Rockstar Revolt Race Trophy!!

Here is a theoretical example of how things could play out; John Stevenson wins class A and Ian Bonthrone wins Class D on the road. John is multiple positions ahead of Ian in the race due to them using cars from different classes however, once we throw in the Revolt Race Handicap calculation it is Ian who takes the Rockstar Revolt Race Trophy as he finished the race 5 seconds behind his target time, whereas John was 10 seconds behind the Class A target time.

The Revolt Race Handicap system is something that can and will be developed further as we gather further lap time data and feedback from competitors. We hope you can get behind the spirit of the handicap system and help us progress and improve the system.

What will it cost?
An additional race fee of £70 per event will be applied.

MSA Blue Book – Q.9.1.2. Any Driver competing in a vehicle of 0.34bhp/kg or higher (excluding driver weight) and measured at the driven wheels, with the exception of single seaters as detailed in 9.1.1 above, must be the holder of a Race National ‘A’ licence, as a minimum.

Regarding policing this, we will have on file every competitors supplied Power Test Certificate as all competitors will also be competing in SLS. As in SLS anyone who is just over the threshold and holds a Race National B Licence could add ballast to bring them under 340bhp/tonne.

Who can take part?
The Revolt Race is in addition to the normal SLS competition, so competitors have the choice whether to enter this element of the day or solely take part in SLS. However, in order to compete in the Revolt Race first you must have taken part in the SLS competition on that day

What cars and safety equipment are eligible?
Your car and safety gear must meet the requirements of Modified Production, Modified Specialist or Sport Libre. A few other subtle changes may also be needed. Please contact our scrutineers if you have any queries at scrutineer@superlapscotland.co.uk

For any other enquiries please contact series coordinator Rory Butcher at rory@superlapscotland.co.uk