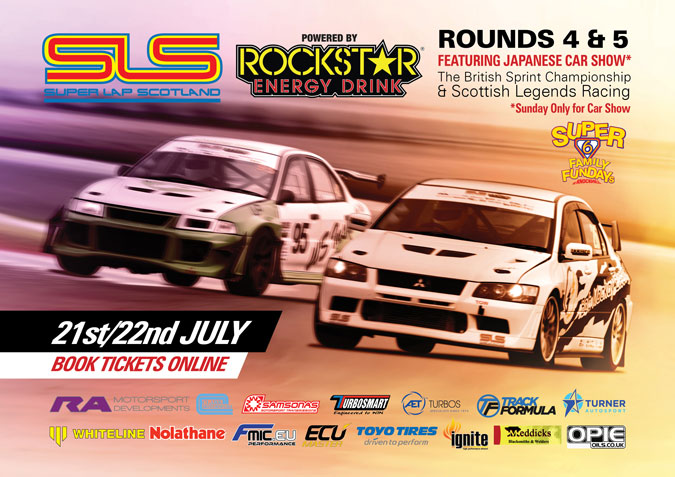 Duncan Vincent recaps on the winners of Round 4 of Super Lap Scotland powered by Rockstar Energy Drink. The action, which took place on the Reverse Knockhill Circuit saw a few new names at the top of the seven championship classes.

Martin Brown, maintained his 100% winning ways with victory is Class F ahead of Ray McGinlay and Yumen Lai. In Class E, Paul Bell, winner last time out on the Reverse track took the honours ahead of Euan Duncan with Stevie McNab in third. Championship leader Michael Foster had issues today and he’ll be working late into the evening to resolve those ahead of round 5 tomorrow.

Ian Pitman in Class D took a well-earned qualification and final victory ahead of a strong field. Pitman, who has competed in SLS in various cars over the years, seems to have finally found his feet behind the wheel of his Subaru Impreza; crossing the finish line with a 57.209s lap, just 0.621 ahead of second placed man Ian Hoggins and Marshall Wishart – despite Wishart taking a rather unconventional line through McIntyre’s in his final lap.

In Class C, David Rybowski took the qualifying win ahead of form-man Chris Cherry and the returning Ian Bonthrone, however, Cherry managed to overhaul Rybowski’s Subaru to claim victory in Class C by just 800ths of a second; crossing the line with a 56.102s effort apposed to Rybowski’s effort of 56.187s. Bonthrone finished day one in P3 and he’ll look to come out fighting for tomorrow’s 2nd round of the weekend on the clockwise track.

Jack Strathdee didn’t quite have the return he was looking for, with his final effort cut short when his car went into limp-mode heading into the hairpin; that left the way clear for Keith Cowie and Fiona Kindness to battle it out for the Class B win. In the end, it was Kindness who took the outright victory with a 54.907s lap.

Steven Jefferies managed to bag himself top spot in qualifying for Class A, pushed hard by Eric Holmes in his Mitsubishi Evo 6 RS. And, it was Holmes who took the overall win in Class A with a 53.732 second effort on the day.

Moving into the Pro class, and as expected it was Andy Forrest yet again with the qualifying and final victory; crossing the line with a 51.664s effort ahead of David Long’s Caterham and Matthew Lawson’s Evo.

That rounds off the SLS action for today, we’ll do it all again tomorrow for Round 5 of  Super Lap Scotland powered by Rockstar Energy Drink. On Sunday, we’ll also be joined once again by the British Sprint Championship, Scottish Legends Cars Championship  and paddock two will host our Japanese themed car show. Additionally, concluding the day will be Round 3 of the brand new Rockstar Energy Chase Series.

Make sure you join us for another fabulous day of motorsport at Knockhill. Tickets are available online until midnight tonight or at the gate throughout the day on Sunday.