The next event at Knockhill takes place on Sunday 7th October when we welcome the Scottish Motor Racing Club and it’s members for the final event of the year. This season, much like every other, has been jam-packed with incident and drama, and with some terrific championship battles set to go down to the wire, there’s still plenty of drama to come at the final round in October

Wayne Macaulay once again proved he is the man to beat behind the wheel of a Fiesta at Knockhill. He won his third title in four years last time out ahead of Blair Murdoch and Stewart Scott in the SMTA Scottish Fiesta / BMW and Hot Hatch Championship.

That still leaves a number of Championships up for grabs when the SMRC series concludes in just under 12 days time. Two of the most finely balanced championships include the Celtic Speed Mini Cooper Cup and Scottish Legends Championship.

David Hunter leads the way in the Legends Championship. He has a 300-point advantage over Ryan McLeish at the head of the field, with the chasing Jordan Hodgson and Ivor Greenwood a further 50 and 60 points behind McLeish’s total respectively. However, with three races and 600 points up for grabs over the course of the weekend, it’s still all to play for. 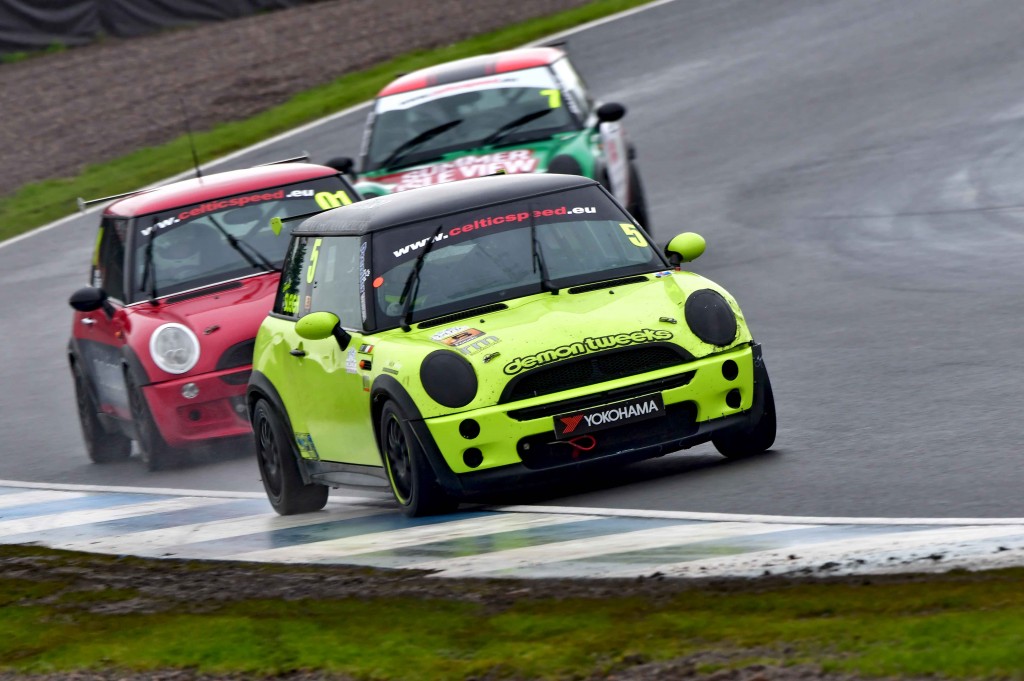 In the Mini series, former Champion David Sleigh tops the leaderboard ahead of John Duncan by a slender 13-points, with Robbie Dalgleish a further 39 points behind Duncan. Again, much like the Legends series, the Mini drivers still have three more races to navigate and with a total of 75-points available it’s still anyone’s guess how this battle will play out.

In the overall Classic Saloons and Sports Car Championship, Class A’s Alastair Baptie heads the overall standings by a single point from Raymond Boyd, with Mario Ferrari a further 28 points behind in 3rd place. As well as the overall Championship title, there are also Class Championships up for grabs when the Classics face-off during two races at the final round of the year. Running alongside the Classics this year is the XR2 Championship, which is currently led by Martin Ramsay who has an unassailable lead at the top of the table ahead of Duncan O’Neill and Duncan Fox.

Much like the Classic series, the Scottish Saloons and Sports Car Championship competitors have individual Class and overall titles up for grabs on Sunday 7th October. William Robson currently leads the overall standings ahead of Paul Rankin (-25pts) and Andrew Morrison (-41pts). Realistically, with 50-points up for grabs, it looks like being a straight head-to-head between Robson and Rankin for the overall Championship win. In the Mini Cooper S R53 Cup side of things, it’s been another fine year for Oliver Mortimer as he adds another SMRC title to an already burgeoning trophy cabinet. He wins the 2018 title ahead of Paul Wilson and Fraser Jamieson.

With another 14-race schedule to get through on Sunday 7th October, you can be sure there will be a few twists and turns in the championship battles before we finally crown the 2018 SMRC Champions. Make sure you join us for an epic end-of-season raceday at the Home of Scottish Motorsport.

Tickets can be booked online, subject to advanced ticket discounts up to midnight on Saturday 6th October. Otherwise, tickets can be purchased at the gate during the event.

Come join us to see off the 2018 Scottish Motor Racing Club season.