After a bumper first meeting of the season for the Scottish / KMSC Championship racers we’re back to action this weekend after a 27 day break, but this time, we tackle the Reverse Circuit layout of Knockhill. 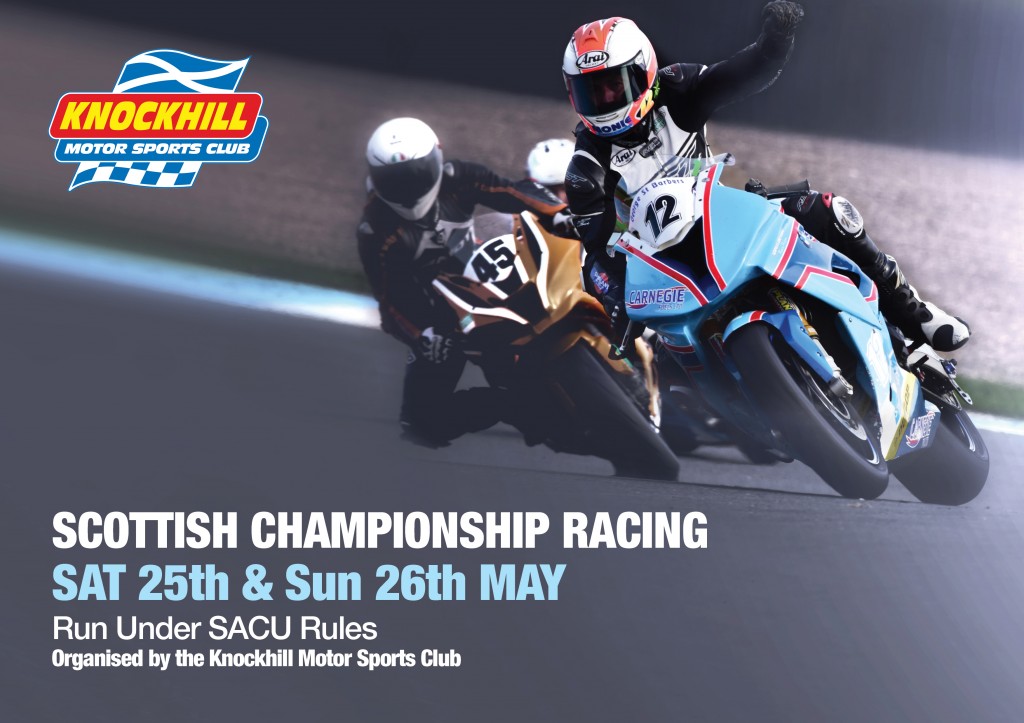 Expect to see up to 120 racers pit their wits against each other across eight individual championship classes. There was some terrific racing across the classes at the opening rounds with stand-out performances from the Superbike/Clubman and CB 500 classes. Indeed, the CB500 class was oversubscribed for the first meeting – a fabulous achievement for all those involved behind the scenes.

Another jam-packed weekend of racing awaits fans this weekend (25/26 May) as we run through another frenzied programme of 28 races across the two days. Saturday will see a mixture of warm up, qualifying and race action (racing from approximately 1.30pm). On Sunday, the riders will have a quick warm up session of ten minutes (6 categories) before we head into a programme of 16 races which will hopefully provide the same exciting entertainment we witnessed 27 days ago.

Scottish racing stalwart Bruce ‘the Barber’ Birnie was back on form at Round 1 and enters again for this double-header – albeit in two classes this weekend. He’ll assume his normal berth in the Scotwaste supported Superbike and Clubman class and mix it up with the young guns in the Formula 600 class alongside the likes of Sam Munro – who took a clean sweep of victories at Round 1 – James McLaren – who has taken to riding a 600 like a duck to water and Lewis Paterson – who narrowly missed out on the Scottish title in 2018.

However, a strong Superbike entry with the likes of Matt Paulo, the Gilfillan Brothers and Ewan Gray will also keep ‘the Barber’ on his toes this weekend. In the Clubman class, Andy Buchanan, Scott Murray and Christopher Liddell will once again go toe-to-toe for the podium positions.

We had so may CB500 entries at the opening event of the year that we had to run two qualifying sessions. We should see another strong entry this weekend, with defending Champion Jodie Chalk on the back foot for once. Keith Shepherd has been a constant thorn in Chalk’s side for a number of year’s now and at the last meeting eclipsed her points haul by 8-points to lead the CB500 standings heading into the weekend. Expect close racing up and down the gird in this one as the CB500 racers take to the track for four races this weekend.

Additional action will come from the Lightweight, F400, KMSC 125 and Pre-Injection 600 classes this weekend. Join us for a thrilling weekend of 2-wheeled sport at Scotland’s National Motorsport Centre.

Tickets can be pre-booked online via the Knockhill website until Friday night for Saturday’s action and Saturday for Sunday’s main raceday (subject to collection at the gate after Wednesday’s postal deadline).

On the day tickets will also be available throughout the weekend – subject to the slightly more expensive gate pricing.