Over the course of 2011, Knockhill embarked on an ambitious project to overhaul the Scottish bike racing scene by starting its very own Club Racing Series. It’s the first time in recent history that Knockhill’s bike racing events wouldn’t be run by a third party. 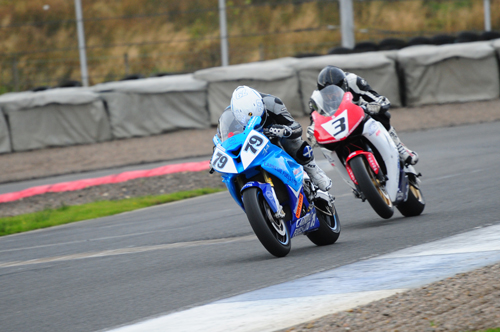 We brought a whole host of new features to the club racing scene in Scotland, including title sponsorship of the top two racing classes by BMW Motorrad Central Scotland, new racing classes, new awards and new pre and post race procedures. We also managed to secure Motors TV to exclusively televise the Knockhill Club rounds, a great new feature for Scottish riders and their associated sponsors.

Since the launch of the Knockhill Motor Sports Club earlier this year entry numbers have steadily increased and feedback has been extremely positive. We had 80 plus riders here today, remarkable considering that the Scottish Championship season has already finished.

“It’s a superb turn out for our final event, there has been a lot of work behind the scenes and to be standing here today, having completed 4 rounds very successfully is great testament to everyone involved.

“Sponsors, Marshals, Officials, Staff, Competitors, Medics, the list is endless. We are delighted with the way the Club has been received and look forward to pushing things on again next year,” said Knockhill Events Director Stuart Gray.

The action on track today also befitted a championship decider, with several classes going down to the wire and only the smallest of margins separating some competitors. Bruce Birnie secured the BMW Motorrad Central Scotland Superbike title, despite the efforts of Adrian Clark who pushed all the way today with 3 race wins.

Mike McLean finally secured the BMW Motorrad Central Scotland Superstock 600 title by the slimmest of margins. The hard charging Roy Houston still had a glimmer of hope heading into the last race of the day, but visibility problems forced the Kirkcaldy racer to back off towards the end to ensure the safe return of his Kirkcaldy Kawasaki sponsored racing machine. The 600 class had been extremely competitive all year long and provided some exhilarating entertainment. It should be one to watch next year with so many talented riders capable of winning races.

Knockhill supremo Derek Butcher even rolled back the years to claim the 2011 Clubman title. Derek secured a hat-trick of race wins today to storm to the top of the standings. Owen Fozzard probably secured the most dramatic title win by pipping Tom Robinson to the F400 title by a mere point. Robinson did however win the Wullie Brown trophy, to rapturous approval from his fellow competitors.

Other awards on the day included the Knox Rider of the day, which went to Highland racer Donald MacFadyen.

Well, that concludes our very first Knockhill Motor Sports Club bike racing series. The atmosphere at all the meetings has been superb and we very much look forward to welcoming everyone back next year. Hope you can join us!

All the images from today’s racing can be found here.